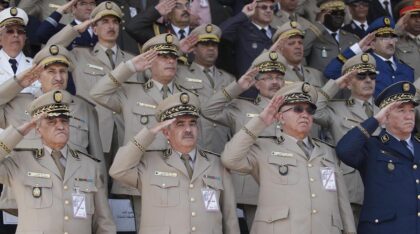 Algeria is in an effective state of undeclared martial law. The country is currently run by a group of shadowy figures from the military and intelligence services, says a report released by Menas Associates, a UK consultancy firm providing actionable intelligence.

The Algerian body, Haut Conseil de Sécurité (HCS), is supposed to intervene only when the country is threatened by: an insecurity crisis; a threat of foreign aggression; or major disturbances threatening public order and national security. This is evidenced by the very limited number of times that it has been called on to meet.

Before President Abdelmadjid Tebboune came to power in December 2019, the HCS last meeting was on 31 January 2011. Since he came to power, however, there have been 15 meetings of the HCS which tends to confirm that the country is reeling under the grip of an opaque military-intelligence regime, say the private UK intelligence analysts.

They affirm that the current situation in Algeria, specially the HCS’ role and the undeclared state of martial law, is reminiscent of the early 1990s is not coincidental.

“In a nutshell, the real forces behind the regime are little changed from those behind the 1992 coup and the subsequent civil war”, adds the report, describing four Generals as the main decision-makers in the country.

These are Khaled Nezzar, former Minister of National Defense, key orchestrator of the 1992 coup, and the main force within the HCS at that time, Mohamed ‘Toufik’ Mediène, Head of the intelligence & security service (DRS) during the 1990s. He is now the shadowy and most influential force behind the scenes.

M’henna Djebbar, the 1994-2015 head of the Direction Centrale de la Sécurité de l’Armée (DCSA) when Mediène ran the DRS and one of his most feared butchers of the 1990s, remains at the heart of the military and intelligence staff. According to Menas Associates, he is consulted on an almost daily basis by both Tebboune and Saïd Chengriha who together nominally run the country.

Army Chief of Staff, Saïd Chengriha who was a prominent general in the 1990s when he was responsible for some of the most gruesome massacres of civilians conducted by the security forces.

The four Generals, who have blood on their hands, are now all in the late 70’s and 80s. They are all driven by the fear that, should the regime be ousted in one way or another by the Hirak or some other such forces, they are likely to stand trials for the crimes committed during the 1990s bloody and brutal civil war.

According to Menas Associates, the strategy of these men is one of personal survival, with their immediate aim being to destroy the Hirak and its associated supporters, irrespective of the immense and ruinous long-term damage that they are inflicting on the state.

They also affirm that that Gen.M’henna Djebbar was the key figure who was effectively in charge of organizing the recent Kabylie forest fires, in order to punish Kabylie because it is the heartland of the popular Hirak movement.