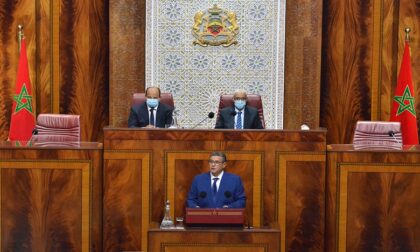 The newly appointed head of the government Aziz Akhannouch kicked off his mission by chairing the first ministerial council followed by a presentation of a government program before members of the parliament with strong social and economic commitment.

Akhannouch was designated head of the government after his party came first in Sept.8 elections. He built a parliamentary majority together with PAM and the Istiqlal and set up a compact government of 24 portfolios.

The program aims at meeting Royal directives, the recommendations for implementing the new development model and includes measures to bolster economic activity and cut disparities.

The government vows to create 1 million jobs in its five-year term, increase women involvement in economic life from 20% to 30%, generalize social protection and expand the middle class including in rural areas in addition to improving Morocco’s education system to rank among best 60 in the world and allocating 100 million dollars to implementing the official character of the Amazigh language.

Akhannouch told MPs that the social policy of the government would strive to achieve a better targeted social support to the needy through guaranteeing stable revenue to the poor, the elderly and people who have special needs.

Hence the need for completing the unified social register which would enable the targeting of the needy and ensuring steady financial assistance.

The increase in social protection and the generalization of health coverage would put the health system under high demand and this requires a reform of public health services, said Akhannouch.

Therefore, the government has allocated additional funds to the health sector to finance the reform through increasing the number of health workers, building more health centers and ensuring availability of health care across the kingdom.

The reform of the educational system was also highlighted as a priority for the current government starting with the rehabilitation of teachers while ensuring them better starting salaries and better working conditions, Akhannouch said.

At the economic level, the government pledged to foster the national productive fabric and promoting job creation notably in a context where the economy is recovering from the Covid-19 impact.

In this respect, focus will be geared to promote entrepreneurship, providing rescue to endangered companies and unlocking investment.

A program to hire people without degree at local administrations will be kicked out to employ on basis of two-year contracts 25,000 people and the government would maintain the Intelaka program to encourage entrepreneurship among the youth through guaranteed loans.

In implementation of Royal directives, the government promised to strengthen Morocco’s strategic reserves in terms of food, energy and medicine.

The government would also ensure a level playing field for all economic operators and ensure simple administrative procedure to facilitate doing business in the country.

The Moroccan economy is expected to grow by more than 5.5% this year after a contraction of 6.8% last year under the impact of Covid-19.