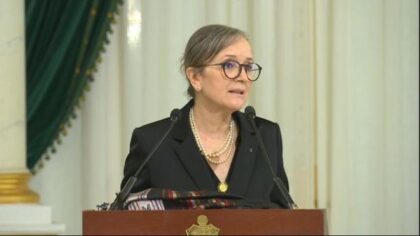 Tunisia’s Prime Minister Najla Bouden said in an address, following the announcement of her government lineup, that the cabinet’s top priority is to combat corruption, otherwise, she added, any attempt at reform will be called into doubt.

The management of State affairs requires an evaluation, analysis and reorganization operation to set priorities and restore confidence in government action, she was quoted by TAP news agency as saying.

The PM, whose appointment has been criticized by several members of the suspended parliament as unconstitutional, underlined that the governmental action will indeed focus on restoring confidence in the State and the confidence of citizens and young people in their capacities, which can only be achieved by guaranteeing equal rights under the law, in addition to the confidence of Tunisia’s partners.

She also said that hope in the future lies in the development of skills for the implementation of reforms and projects.

To ensure the efficiency of government action, we will endeavor to specify the smallest tasks of the various ministerial departments and public institutions, she said, insisting on the need to enshrine the principle of oversight and accountability.

Bouden stressed the urgency of an economic revival through, notably, freer initiatives and the involvement of young people and the regions.

On the social front, she affirmed commitment to work for the improvement of the citizen’s living conditions and purchasing power and to defend his right to better quality services such as transport, education, health and security.

Najla Bouden, who affirmed in her address, the openness of her cabinet to all opinions, specified that in order to guarantee the continuity of the government’s work, it was decided to keep the current structure of the ministries and to consider later on the development of their activities and working methods.

The announcement of the new cabinet was preceded by a huge demonstration, for the third Sunday in a row, as thousands of Tunisians took to the street to denounce President Kais Saied’s power seizure since July 25, in a move branded by his critics as a “coup”.

The demonstrators gathered in front of the main theater hall of the capital Tunis chanted slogans against Saied and demanded the end of the exceptional measures as well as the President’s ouster.

Saied July 25 took the country by surprise as he sacked then Prime Minister Hichem Mechichi, seized the executive power and froze the activities of the state legislature and suspended the immunity of lawmakers.

The move made in the name of the article of 80 of the constitution was supposed to last for 30 days but Saied extended it until further notice.

Participants of the Sunday protests have reportedly attacked state-run television journalists who came to cover the demonstration. Some reporters were whisked to hospital for treatment. The demonstrators also clashed with security forces who tried to prevent them from marching further into Bourguiba Avenue where the interior ministry is located.

During the swearing-in ceremony of the new government Monday, President Saied announced that in the next few days a framework will be found for “a real national dialogue,” unlike what has been done in the past years.

“A national dialogue that will involve young people from all regions and all Tunisians to finalize the revolution and the rectification and liberation process,” he said, as reported by TAP.

He also undertook to set deadlines for each stage, affirming “we will remain in the exception as long as the danger persists in the parliament and other institutions. “We will hunt down the corrupt, the people’s money will be returned to them.”

Referring to the exceptional measures he took on July 25, 2021, the President said, “I took my decision after having tried, by all means to call them to reason, but in vain.”

He harshly criticized the judiciary and the excesses of parliament, as well as calls for foreign interference in the country’s domestic affairs and what he called “the repeated attacks against Tunisia’s sovereignty, through the pressure exerted by certain Tunisian sides abroad to undermine its foreign relations.”