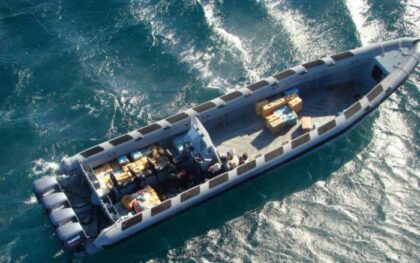 The Coast guard units of the Moroccan Royal Navy have foiled on Sunday a major drug smuggling operation while on a counter-narcotics patrol off the Kingdom’s northern coast.

After chasing a high-speed boat which was trying to escape control, the Coast guards stopped the go-fast boat which was carrying three tons of cannabis and five smugglers.

The seized drug and the captured dealers were handed over to the authorities in Tangier, Northern Morocco. An investigation was opened to identify all those responsible for this smuggling operation and its links with international trafficking networks.

Last week, Moroccan police of Nador arrested a man carrying 6 kg of cocaine and 5 kg of heroine in his car. A second man, who brought in the drugs in his small boat from Spanish occupied enclave of Mellila, was also nabbed.

Searches carried out by the security officer in two houses and one apartment belonging to the main suspect, who is on the run aboard, led to the seizure of two cars and a large sum of money.

Police probe showed the members of this criminal network have links with international drug traffickers operating in the Netherlands, Barcelona and Mellila.