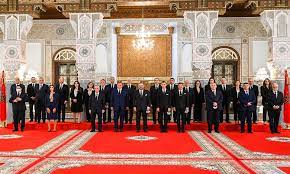 Morocco: Who are the seven women appointed in the new skilled, competent government?

Morocco’s new government includes seven women ministers in a cabinet of 24 members that was named by King Mohammed VI after Sept.8 elections.

The King had appointed leader of the RNI party Aziz Akhannouch, who won most seats in parliament, and asked him to form a new cabinet.

Less than a month, a line up was unveiled in which women take the pride of the place.

Tourism minister in the outgoing cabinet, Nadia Fettah Alaoui, took the prominent portfolio of economy and finance. Restoring balance to Morocco’s government finance will be the main task of Fettah Alaoui in a difficult context of post-pandemic recovery.

Fettah Alaoui, a graduate of HEC business school, started her career in 1977. She stood out as director general of the insurance business of Saham and led the company’s African expansion.

In 2018, she was awarded the title of “CEO of the year” by the Africa CEO forum in Abidjan.

Mayor of Marrakech for two terms, Fatima Ezzahra Mansouri is a prominent lawyer and head of PAM assembly. She was recently elected mayor of Marrakech, a job she will have to give up in order to focus on her new mission as housing minister.

Nabila Rmili was also elected Casablanca mayor following Sept. 8 elections and she will also have to quit the job to take her new position in the government as health minister. She graduated and worked as a doctor before serving as regional director of Casablanca at the health ministry.

Fatima Zahra Ammor was named tourism minister. She has a career of 20 years in the field of high-scale marketing.

Ghita Mezzour who was appointed minister delegate in charge of digital transition is a professor at Rabat’s international university (UIR) and has overseen international-funded projects on youth employment. She has a PhD from Carnegei Mellon University on “Societal computing.”

Leila Benali the new minister delegate in charge of energy transition is an international expert in sustainable energy and chairs the Arab Energy Club. She was a member of the new development model committee.

The current government includes ministers who took part in the new development model commission. These include head of the Commission Chakib Benmousa who was named national education minister, and Higher education minister Abdellatif Miraoui.

“The government sets itself a double priority, namely to submit a program in line with the electoral program, and to build on recommendations of the special commission on the development model.”

The government spokesperson argued that cohesion and synergy between the elements of the government “constitute a guarantee of success in the implementation” of programs and recommendations relating to the new development model.

The Head of Government, Aziz Akhannouch, described the members of his cabinet as skilled and competent.

In a press statement released on Thursday, Akhannouch said that the new appointed cabinet is “full of skills and will work to meet the aspirations of citizens through the implementation of the royal project of the new development model.”

Akhannouch, who is also the Secretary-General of the National Rally of Independents (RNI), said that the new cabinet will be a government focused on “actions and results.”

The new head of government said that Morocco’s new cabinet is aware of the “high expectations” of citizens and will work to address the significant issues that arise.