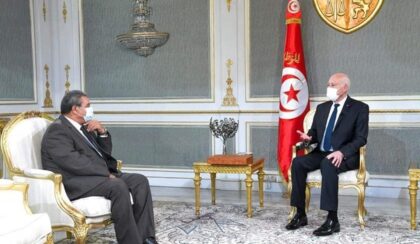 This came during a meeting with the President of financial market council (CMF) Salah Sayel, a day after the country’s central bank (BCT) sounded the alarm over the waning of foreign reserves, the deterioration of international ratings and degradation of the public finance.

Tunisia according to the BCT currently has negative a credit rate outlook. In July, Fitch downgraded Tunisia to ‘B-‘. The North African country therefore will face challenges to raise money on the international market and to get loans from global lenders.

Tunisia has further descended in political uncertainty and political conundrum since July 25 after Saied seized the executive power and suspended the parliament in the name of a fight against corruption and mismanagement.

During the meeting with Sayel, Saied according to his office, said Tunisia must be treated as a sovereign country in its dealing with international rating agencies.

“We are part of the global economy and I tell everyone: we deal with financial institutions but they must also treat us as a sovereign state,” he said.

Several bilateral international partners have become wary of the political situation in Tunisia. The G7 last month urged Saied to restore the country on the path of democracy amid reports of harassment towards political figures, journalists, business people and critics of the president.

Newer PostMorocco: Who are the seven women appointed in the new skilled, competent government?
Older PostLibya: Italy concerned about new waves of migrants if elections not held