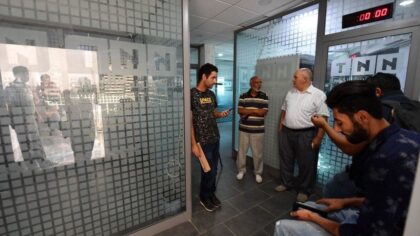 The channel in a Facebook post indicated that security forces accompanied by officials from HAICA, raided the station and seized equipment.

The storming came few days after the arrest of the TV show host, Ameur Ayed, and his indictment following a harsh criticism of President Kais Saied over the ongoing exceptional measures he has put in place since July 25.

Zitouna TV, according to HAICA Chief Nouri Lejmi, has been backed by Ennahdha which he said had opposed every action against the media outlet launched in 2011.

The Islamist party has condemned Saied’s exceptional measures which include the freeze of parliament activities, suspension of lawmakers’ immunity and the seizure of the executive power. Lejmi in an interview with local radio Mozaique FM, debunked Zitouna’s allegations that it is being targeted over criticism of the president’s move.

The HAICA boss added that Zitouna had been warned several times and urged to meet the watchdog’s regulations. In September the media was fined $18,000 for airing unlicensed content. Three other televisions and a religious radio are also being targetted by HAICA.

Meanwhile, the National Union of Tunisian Journalists (SNJT) said it fears a decline in freedoms and human rights in Tunisia, stating that the trial of civilians by military tribunals raises, today, many concerns.

In a statement, relayed by the Tunisian news agency TAP, the SNJT held the President of the Republic responsible for “any decline in public and individual freedoms,” calling on him to honor his previous commitments to ensure the rights, provided by the Constitution.

The Union said it “follows with great concern the deterioration of the state of freedoms in our country, and the multiplication of military prosecutions, for publications or expression of opinion.

“These prosecutions risk undermining the achievements of the revolution, the foundations of the civil state and the values of democracy, pluralism and diversity,” warned the union.

In addition, the SNJT said it rejects “any military trial against civilians for publications, positions, or expression of opinion,” considering it “a blow to democracy and human rights,” added TAP.