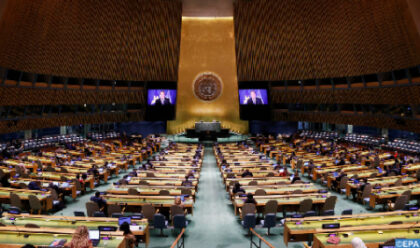 Representatives of several NGOs, university professors and international law experts have voiced, at the United Nations, strong support to Morocco’s autonomy plan for a lasting solution to the Sahara conflict.

Addressing the UN fourth Committee, Nancy Huff, Teach the Children International, focused on the Polisario embezzlement of humanitarian aid, citing her own experience and the conclusions of the European Anti Fraud Office report of 2015, detailing facts relating to the diversion of aid from the camps, which was sold by the polisario leaders on the black market.

Another issue of great concern is the Polisario’s use of children as soldiers and human shields, she said, citing various United Nations Human Rights Council findings in that regard.

Karen Hardin, Priority PR Group, shed light on the human rights violations in the polisario-controlled Tindouf camps and urged the UN Committee to investigate who the polisario members are and what ideology they follow.

She said the Algeria-backed polisario Front holds the Sahrawi population hostage while withholding the aid intended for them and called for a separate investigation into accusations of abuse in the Tindouf camps.

Vivian Eads, Capitol Hill Prayer Partners, expressed concern about Sahrawi youth, who see themselves as victims, affirming that the Sahara issue will not be resolved until the youth receive positive education and can make contributions to society.

She warned that unresolved issues can draw some young people into clandestine activities, noting that young people must be able to see themselves as viable individuals bringing their gifts to their society.

Grace Njapau, Women Investment Network, said the new development model launched by Morocco has provided socioeconomic development and changed the outlook of the region thanks to more than $8 billion investment injected in various projects carried out in the Saharan region.

Moreover, locally elected representatives remain the only instrument to manage the local affairs of the Moroccan Sahara, she said, stressing that the new dynamic makes the region a hub of economic exchange.

Nikaky Lygeros, university professor and expert in geopolitics and geostrategy, noted that the September 8 elections have “dazzlingly” confirmed the attachment of the Sahara population  to their country.

“The inhabitants of Moroccan Sahara’s two regions have already displayed, in the past, a high degree of civic-mindedness,” Lygeros stressed, adding that once again, “they have just reconfirmed [their civic-mindedness] in a dazzling manner” on the occasion of these elections.

Wwith a voter turnout of 66.94% in Laayoune-Sakia El Hamra and 58.30% in Dakhla-Oued Eddahab, these two Moroccan Sahara regions exceed, by far, the national average of 50.35%, he said.

Militant jihadist groups and Latin American drug cartels that have partnered to transport drugs, arms and humans across the Sahara Desert have infiltrated the Tindouf camps, he added, saying that this has led to increased cocaine trafficking from South America to Europe via established routes in Africa.

Rwanda University professor Ismail Buchanan Aboui the autonomy plan offered by Morocco for the Sahara guarantees to the local population the right to democratically run its own affairs, the resources to develop the region, boost the local economy and culture.

It is of paramount importance that the new UN Sahara envoy builds his work on the gains of the two round tables held in Geneva in 2018 and 2019, he said, stressing that the autonomy plan is the only serious and credible initiative that can put an end to the dispute within the framework of Moroccan sovereignty and territorial integrity.

Evaristo Julio Gomes, Valor Económico, praised Morocco’s efforts to fight terrorism throughout the Territory, saying Morocco’s new model for development will benefit the entire region and turning it into an important economic hub.

Nykaky Lygeros, University of Lyon, said Morocco’s sovereignty over its Sahara internationally recognized. He recalled the high turnout of voters in Moroccan southern provinces in the latest elections held in the country, saying that the massive participation of Sahrawis in these polls reflects their commitment to the political process. By contrast, the Polisario offers no alternative and no plans for future.

British politician Derek Conway expressed his hope that the Committee will urge all interested parties to continue to participate in the Geneva round table process.

Most Member States support Morocco’s autonomy initiative as a “realistic, serious and credible basis” for resolving the Sahara dispute, he said, affirming that this plan is “also the guarantee of a bright future for the entire Sahel Sahara region”.

He voiced hope that the Committee will examine concerns that the lack of accountability for the diversion of humanitarian aid creates an incentive for the polisario Front to stall progress in the political process.

Jean Delors Biyogue Bi Ntougou, Omar Bongo University, warned that the Tindouf zone could become a hub for terrorist groups and a transit area for arms trafficking, exposing the entire region to security threats and instability. He called on Algeria to contribute positively to the settlement of the dispute by discontinuing its support for the Polisario armed militias.

For his part, petitioner Pierre-Michel Nguimbi, called on Algeria, as host country of the Tindouf camps, to assume its humanitarian role, recalling Security Council resolution 2414 (2018), which demanded the Polisario Front to stop carrying out destabilizing actions at the risk of compromising the political process.

André Gakwaya, Rwanda Media Commission, expressed support for Morocco’s autonomy proposal for the Sahara, saying this plan represents a true opportunity to promote negotiations aimed at achieving a lasting settlement to the dispute.

Sticking to this outdated option is a waste of time while people in the Tindouf camps continue to languish, living in inhumane conditions, he said.

Mansour Mohamed Fadel Douihi, Sahrawi Association against impunity in Tindouf camps, said the recent report by the UN Chief on the situation in the Sahara referred to pragmatic approaches to conflict resolution and promoting peace in the region and highlighted the socioeconomic development accomplished in the Moroccan Sahara.

The report held the Polisario Front responsible for hindering the UN process and stressed Algeria’s pivotal role in the deterioration of humanitarian situation in the Tindouf camps.