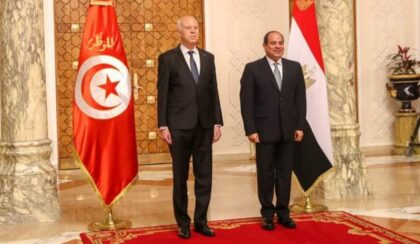 Tunisian President Kais Saied Wednesday expressed willingness to learn from Egypt’s experience in areas of security and stability, at the time Tunisians and Tunisia’s partners are wary of the waning of democracy in the North African country.

Saied expressed the wish at a phone conversation with his Egyptian counterpart to congratulate him on the 48th anniversary of Yom Kippur War, also known as the 1973 Arab–Israeli War or the Fourth Arab–Israeli War.

The Egyptian leader according to his office in return expressed Egypt’s support for the measures and efforts of President Kais Saied, aimed at building a ‘better future’ for the brotherly Tunisian people and achieving stability in the country, Egypt Today reports.

The Tunisian leader, also according to the Egyptian presidency, highlighted Tunisia’s pride in the close ties that bind it to Egypt and the willingness of his country to benefit from the Egyptian expertise and experience in light of the achievements made in recent years at the internal level in the fields of security, stability, and development, Business News notes.

Ties between the two countries have deepened following Saied’s April visit to Cairo, few months before he seized the executive and the legislative power on July 25 after sacking then Prime Minister Hichem Mechichi, using Article 80 of the constitution as tool.

London-based Middle East Eye (MEE) in August in the wake of the power seizure by Saied, revealed that Egyptian security officials were advising the Tunisian President on his moves. Egypt and the UAE have been finger-pointed by Saied’s critics of supporting what they branded a “coup”.

The Egyptian President himself has been under fire for blowing up the democratic gains of the 2011 revolution that removed former and late autocratic leader Hosni Mubarak. The Egyptian President brushed aside calls for respect for human rights arguing that Egypt needs stability over freedom of speech.

Saied has extended until further notice the exceptional measures he has taken. The extension has exacerbated fears for the establishment of dictatorship in Tunisia. Under the measures, dozens of people including politicians, former ministers, state officials and journalists have been put under house arrest, banned from traveling, or detained for criticizing the president.