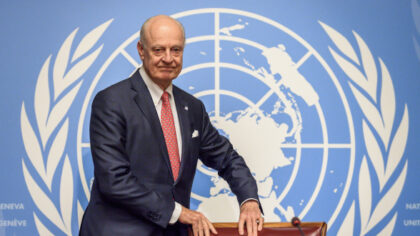 Staffan de Mistura was appointed to the position after having been endorsed by the UN Security Council.

The United Nations Secretary-General, Antonio Guterres, had actually begun consultations with the Security Council members on Staffan de Mistura’s appointment as his Personal Envoy for the Sahara in mid-September.

Morocco’s Permanent Representative to the UN Omar Hilale had then said that Morocco, which has been consulted beforehand about this appointment, had informed Antonio Guterres of its approval.

Morocco’s approval emanates from its permanent confidence and its constant support to the efforts of the UN Secretary General, in order to achieve a political, realistic, pragmatic, sustainable and compromise-based solution to the regional dispute over the Moroccan Sahara.

The Italian-Swedish diplomat, who succeeds former German President Horst Köhler, has a mandate to facilitate the exclusively UN process aimed at achieving a realistic, pragmatic, lasting and compromise-based political solution to the regional dispute over the Sahara. This solution must be in line with the resolutions of the Security Council since 2018, as reaffirmed by the UN Secretary General in his recent report to the Security Council on the Moroccan Sahara.

In the letter of appointment addressed to the Security Council, the UN Secretary General said that Staffan de Mistura will work with Morocco, Algeria, Mauritania and the Polisario on the basis of resolution 2548 of October 30, 2021 and other resolutions of the Council, as well as taking fully into account the progress made so far, in order to achieve the political solution of the Sahara issue.

These Security Council resolutions, mentioned in the Secretary-General’s report, namely 2440, 2468, 2494, and 2548, reaffirmed that the political, realistic, pragmatic and compromise solution is the only way out of the Moroccan Sahara issue. Like all those that preceded them, for more than two decades, they have definitively buried the referendum and no longer refer to it. At the same time, the pre-eminence of the Autonomy Initiative, within the framework of the Kingdom’s sovereignty and territorial integrity, has been reaffirmed in the 17 resolutions adopted by the Security Council since the plan presentation in 2007.

In addition, these resolutions established the roundtable meetings, with the participation of Morocco, Algeria, Mauritania and the Polisario, as the only framework for conducting the exclusively UN political process. They mention Algeria five times, as many times as Morocco, confirming Algeria’s role as the main party in the regional dispute over the Moroccan Sahara, and calling on it to show realism and compromise in order to reach a political solution to this dispute.

In this regard, Staffan de Mistura should begin his facilitation in the coming weeks. In accordance with his letter of appointment and with Security Council Resolution 2548, he will start this facilitation where his predecessor left off, namely the roundtable meetings process, with its four participants and according to the same modalities.

Mistura has 40 years of experience in diplomacy and political affairs, especially in the field of conflict management and resolution.

A veteran UN diplomat, DeMistura has served the organization in several sensitive, difficult positions, including as a Special Envoy of the UNSG in Syria.

In addition to Syria, the diplomat also served as the UN’s focal point in various conflict areas, including Somalia, Sudan, and Ethiopia, among many others.

Outside of his UN career, De Mistura also served as Undersecretary of State for Foreign Affairs and thereafter Deputy Foreign Minister in Italy.