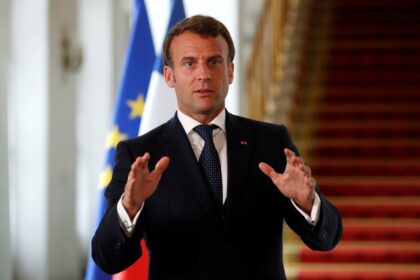 French President Emmanuel Macron maintained the statements that angered Algeria and said that he expects more tension with Algeria regarding memory.

The French President had told students with a background linked to France’s colonial presence in Algeria that the North African country did not exist as a nation prior to its independence in 1962, he described Algeria’s President Tebboune as “caught within a harsh regime” and rebuked the political-military regime in Algiers for surviving on “memory rent” based on the hatred of everything French.

Algeria responded by recalling its ambassador and closing its airspace to French military aircrafts involved in the Barkhane anti-terrorism operations in the Sahel.

Speaking on Oct. 4 to France Inter, Macron attempted to play down the impact by saying he respects the Algerian people and the president but hinted that what he said should have been said.

“Life is made for speaking about disagreements and sharing them,” the French president said.

For many analysts, Macron’s statements indicate the unwillingness of France to turn a blind eye on the descent of the Algerian military regime into chaos as it steps up repression against opponents.

France has previously turned a blind eye to what is happening in Algeria and abstained from commenting on the repression of Hirak activists.

But for regional powers, the increasing repression coupled with economic inefficiency of the Algerian military rule is a source of concern and a source of instability for the whole region.

As the army laid its power grab on state apparatus ruling behind a puppet civilian president who has no power, Algeria faces its worst economic crisis since the end of the 1980s. Many say the current situation bodes ill for the country’s social peace in the absence of whatsoever reforms to lift the country from its endemic dependence on shrinking oil and gas revenue.

France’s straightforward and scathing remarks regarding Algeria’s military rule is another indication of how isolated Algeria has become in a rapidly changing regional environment.

Algeria is now perceived as a source of instability in an already troubled region. It has opened the gates for illegal migration to Spanish islands, worsened tensions with its only stable neighbor, Morocco, whom it seeks a casus belli with, has maintained ambiguity on the fight against terrorism and worsened the crisis in Libya by supporting the West against the east.