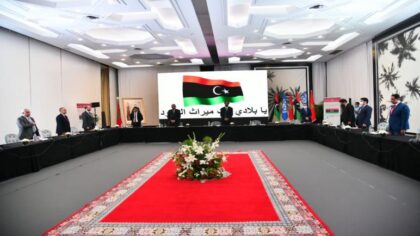 US envoy to Libya Richard Norland thanked Morocco for facilitating talks between Libyans with a view to preparing for Dec. elections.

Rabat hosted last week two-day talks between representatives of the House of Representatives and the High State Council with the participation of UNSMIL as a technical facilitator.

“We thank Morocco for its willingness to host these talks and for working to ensure that Libyan elections take place on time,” the US ambassador said in a statement.

“During my time in Rabat, I had a chance to meet separately with the participants. While it is clear that efforts are still needed to bring the parties closer, we hope due consideration will be given by each side to the legitimate concerns expressed by the other,” he said.

Norland urged Libyan rivals to move forward now so candidate registration and other aspects of implementation can begin in order to hold elections on December 24.

“No individual or institution should have veto power over critical electoral legislation – rather, Libya’s institutions and their leaders must trust the voters to decide who should lead the country,” he said.

The United Nations Support Mission in Libya (UNSMIL), which participated in the consultative meeting, welcomed the call of the two delegations on the international community to support the electoral process.

The participating delegations issued a statement saying the Rabat meeting was a continuation of the momentum created by the Skhirate agreement in 2015, adding that current talks aimed at finding common ground for holding Dec. 24 elections in a spirit of consensus.

“Talks took place in a friendly and brotherly atmosphere marked by mutual understanding and consensus,” the Libyan delegations said in a statement.

Morocco has often said that it was ready to offer Libyans conditions propitious for finding a purely Libyan solution to the current crisis without foreign interference.