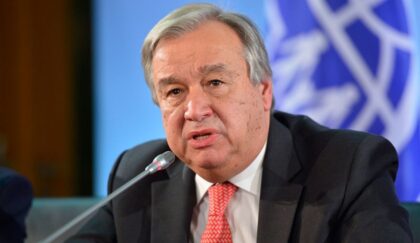 UN Secretary General Antonio Gueterres mentioned in a recent report that Polisario militiamen used civilians as a human shield during a three-week blockade of a vital road for West African traffic with Morocco.

In a report to the UN Security Council on the situation in the Sahara region, Guterres acknowledged that Polisario armed men have been deployed along with trucks loaded with arms to the Guergarat border crossing.

Polisairo had denied the presence of its fighters and claimed that it was a peaceful protest that halted traffic between Morocco and West African countries leading to a food crisis in Mauritania which depends on Morocco’s fresh produce.

MINURSO helicopters monitored the area and detected between October and November last year no less than 12 Polisario fighters in uniform in Guergarat as well as 8 military vehicles.

The Polisario had denied access to MINURSO observers to the border crossing while Morocco was urging the international community to pressure Algeria and its Polisario proxies to free the area.

But three weeks after the blockade, Morocco’s army intervened peacefully prompting an escape of the armed Polisario militias from the border crossing without casualties.

The UN Secretary General confirmed that there were no casualties in his report, adding that the presence of the Polisario in Guerguarat was a violation of military agreement number 1.

Guterres also discredited Polisario report claiming that there is a war in the Sahara, saying that there were only minor skirmishes to which Morocco’s army has responded.

The UN chief also expressed concern that the recent developments in the Sahara represent a setback for efforts to reach a political solution.

He recalled the increasing number of countries that opened consulates in the Sahara and highlighted the US decision to recognize Morocco’s sovereignty over the territory.

He also shed light on the development push in the territory where Morocco launched express road and plans to build one of West Africa’s largest ports in Dakhla.

Morocco has said recently that any return to the negotiation table would be conditioned with the participation of Algeria as the real party that has created the conflict and that has armed the separatist group.