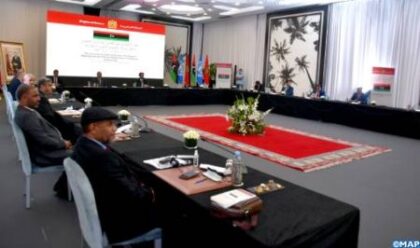 The UN expressed, on Saturday, its support for the outcome of the consultative meeting, held on Thursday and Friday in Rabat, between the delegations of the Libyan House of Representatives and the High State Council on the legal framework of the upcoming elections in Libya planned for December 24.

The United Nations Support Mission in Libya (UNSMIL), which participated in the consultative meeting, welcomed the call of the two delegations on the international community to support the electoral process.

According to UNSMIL, this call was made to support this electoral process based on agreed laws and on the outcomes of the Libyan Political Dialogue Forum.

The UN body said the two parties also urged the international community to ensure compliance with the results of these elections through the provision of international observers to guarantee the proper conduct.

It also welcomed the “positive atmosphere” that prevailed at the Rabat consultative meeting.

The UN Mission also expressed its thanks to Morocco for hosting the meeting, which aimed to agree on the organization of presidential and legislative elections on December 24, 2021.

The Libyan participating delegations also expressed gratitude to Morocco for hosting the talks and for supporting the Libyan people in achieving peace and stability in their country.

In a statement issued at the end of the meeting, the delegations said that the Rabat meeting on Sept. 30-Oct.1 is a continuation of the momentum created by the Skhirate agreement in 2015, and that the current talks aimed at finding common ground for holding Dec. 24 elections in a spirit of consensus.

“Talks took place in a friendly and brotherly atmosphere marked by mutual understanding and consensus,” the Libyan delegations said in a statement.

US Envoy to Libya Richard Norland who took part in Rabat talks voiced hope to see Libyan rivals reach an agreement on elections in two weeks.

The US Ambassador said that the representatives of both sides are committed to laying the constitutional foundations paving the way for the holding of these elections as planned.

The US diplomat thanked Morocco for hosting this new inter-Libyan meeting, in addition to the previous ones held in Skhirat, Bouznika and Tangier. He expressed hope that the efforts deployed by the Kingdom and the UN would lead to the voting and the formation of a unity government for the return of peace and stability to this country.

Morocco has repeatedly said that it was ready to offer Libyans conditions propitious for finding a purely Libyan solution to the current crisis without foreign interference.