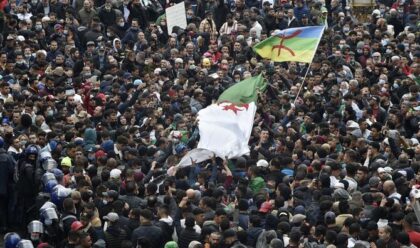 The Algerian regime has “escalated these tactics to demonize and delegitimize peaceful activists and journalists. This is merely a smokescreen to hide their bitter repression of activism,” said Amna Guellali, Amesty International Deputy Director for the Middle East and North Africa.

Not content with the prosecution of activists in Algeria, the junta also requests the extradition of militants who sought refuge abroad.

In this connection, Algerian authorities have reportedly asked Paris to extradite some twenty political opponents to the regime who sought refuge in France to escape the brutal repression in Algeria, according to local media.

The Algerian foreign intelligence agency and the Algerian National Police have officially sent in mid-September an official list containing the names of twenty people of Algerian nationality established in France and who are actively sought by the Algerian justice.

However, these twenty people are not delinquents, thugs, oligarchs on the run after having embezzled colossal sums in Algeria nor are they corrupt political and military leaders like General Ghali Belkecir, the former commander of the National Gendarmerie. No, the list of these people wanted by Algeria contains only the names of journalists, militants and Hirak activists, or supporters of the MAK and Rashad movements, local media note.

These extradition documents detail and list serious accusations of endangering the security of the Algerian state and of plotting against national security. Some of these wanted people are simply accused by the Algerian authorities of “terrorism” or of active participation in “terrorist action”.

The propaganda of the Algerian services which presents any opponent as a potential “terrorist” is like a regime which has lost all real legitimacy, including in the barracks where some of the officers are no longer really in tune with the high command, itself very divided.

The newspaper “El Watan” listed no less than thirty generals detained since the end of the presidency of Abdelaziz Bouteflika in 2019. This testifies to the fractures within a military institution which is the only one today to represent what remains of the State.

The Spanish government yielded, in defiance of the rule of law, to pressure from the Algerian authorities and extradited a former gendarmerie officer turned opponent who had denounced on social networks the various trafficking in which some of the Algerian officers are engaged.

Local media hope that the French government will not follow Spain’s example by taking the risk of cutting itself off from a large majority of the Algerian people and its relays within the diaspora, who no longer recognize themselves in the authoritarian practices of another age.

Relatedly, in a recent press release, AI called on the Algerian authorities to immediately release journalists Hassan Bouras and Mohamed Mouloudj and drop the unfounded charges against them, stressing that “it is abhorrent to see those seeking to exercise their right to freedom of expression prosecuted in such a systematic way.”

In June, the authorities amended the definition of “terrorism” to allow the prosecution of peaceful activists and critical voices such as Hassan Bouras and Mohamed Mouloudj.

Both face potential prosecution for their online publications criticizing the authorities and for their affiliation with two organizations, the unregistered political opposition group, Rachad, and the Movement for the Self-determination of the Kabylie (MAK).

They have been charged for terrorism-related offences, including under Article 87bis, which carries the death penalty and vaguely defines terrorism as any act “against state security, the integrity of the territory, the stability and normal functioning of state institutions.”

In May, the Algerian High Security Council labelled the two organizations as “terrorist” entities. Since then, dozens of individuals have been arrested and prosecuted under terrorism charges for their alleged ties to the two organizations, including human rights defenders and journalists Kaddour Chouicha, Said Boudour and Djamila Loukil along with 12 other civil society and political activists.