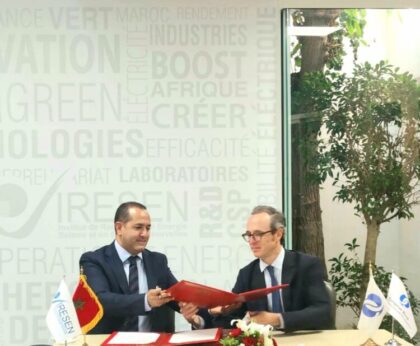 Under the agreement sealed Wednesday, the two parties pledged to strengthen their cooperation in the promotion of investments in green hydrogen, renewable energy, smart electricity networks, energy efficiency, energy storage and e-mobility.

For his part, Harry Boyd-Carpenter, EBRD Managing Director for the Green Economy said: “The EBRD is fully committed to supporting the development of green hydrogen value chains. In combination with competitive renewable electricity, green hydrogen is a key ingredient in accelerating the decarbonization of Morocco.”

IRESEN Director General Badr Ikken said: “We are thrilled to partner with the EBRD in order to give a new impetus to the energy transition in Morocco.

The decarbonization of the Moroccan economy requires the development and adoption of sustainable technological solutions, adapted to the country, he added, noting that this is the goal of the alliance set between the EBRD and IRESEN.

IRESEN was set up in 2011 to support Morocco’s national energy strategy and enhance research and development in the field of solar energy, new energies and related technological applications.

Morocco is a founding member of the EBRD. Since 2012, the Bank has invested almost €3 billion on 74 projects carried out across the North African Kingdom.