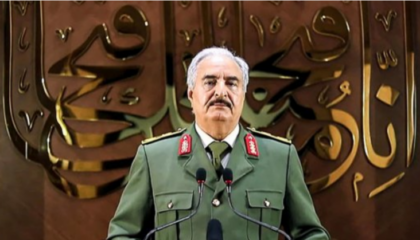 The communication office of the General Khalifa Haftar has indicated that the Egypt-backed retired army commander has stepped down for three months until December 24; dates of the projected elections in war-plagued country.

The office in a statement Wednesday said Haftar has appointed Chief of General Staff, Abdelrazik Al-Nathori to replace him from September 24 to December 24.

Haftar’s temporarily resignation begs the questions whether he will run for the December 24 crucial elections that will endow the country with a central government. The army commander has been rumored to be a presidential hopeful.

Libya’s House of Representative (HOR), in the preparation for the elections, has passed a presidential election law which allows political and military positions’ occupants to run for elections if they left their jobs three months prior to December 24.

If they failed to be elected, they can return to their jobs and get their three months’ salaries, Libya Observer reports.