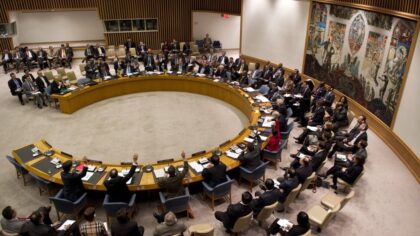 The UN Security Council unanimously agreed Wednesday to extend the UN Support Mission in Libya (UNSMIL) until the end of the month.

“The situation in Libya continues to constitute a threat to international peace and security,” the Security Council said in its resolution of UNSMIL 15-day mandate extension.

Both the US and Russia backed the resolution and provided their support for December 24 elections. “UNSMIL has a vitally important role in helping Libya achieve peace and stability, including by supporting preparations for national elections and the implementation of the ceasefire,” said the US representative at the Security Council.

“Our main aim now is to help the Libyan people to stick to the established timetable for the 24th of December parliamentary and presidential elections, and all of our efforts should be aimed to that end. We hope that this is the goal that is shared by all members of the Security Council,” Russia representative said.

There has also been debate among council members over the structure of the UN presence in Libya, with the US pushing for a UN representative to be permanently based in Tripoli.

Jan Kubis who currently leads the UN mission is based in Geneva, but the US argues that since the country has achieved peace, he should be moved to Libya to facilitate greater engagement with stakeholders on the ground.