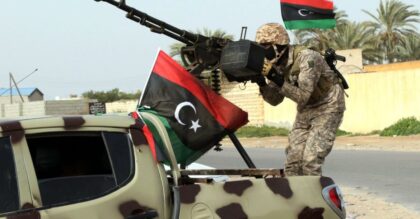 “A large-scale operation” was carried out by the special forces of the Tarek ben Ziyad Battalion, one of the units of the forces loyal to Marshal Khalifa Haftar, “against mercenaries and Chadian opposition elements present on Libyan territory,” Libya al-Hadath TV, the media arm of Marshal Haftar, said.

“Their positions were targeted in Tarbu on the southern border,” Libya al-Hadath added.

The Tarek Ben Ziyad Battalion, which reported one death, said its units “destroyed several armored vehicles and eliminated those inside,” before “chasing those who fled to the border.

Several Chadian rebel groups, including the Front for Change and Concord in Chad (FACT), are based in Libya, Sudan or in border areas with these countries. FACT launched an offensive on April 11 on N’Djamena that led to the death of President Idriss Déby Itno, who has been in power for 30 years.

FACT, for its part, said in a statement that one of its positions had been attacked by the brigade known as Tarek ben Ziyad, supported by Sudanese auxiliaries and supervised by French army officers from the Barkhane mission. The group specifies that the fighting took place on Chadian territory.