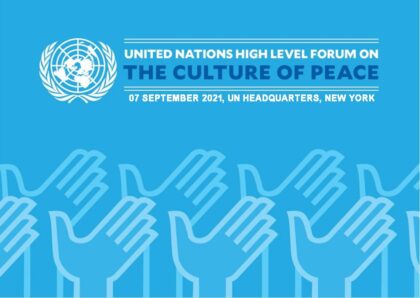 Morocco has reaffirmed Tuesday at a high-level forum in New York its firm commitment to peace and dialogue between religions and cultures.

“The Kingdom of Morocco reiterates its unwavering commitment to the promotion of the values of peace, dialogue between religions and cultures, mutual respect and human dignity, and remains willing to continue its commitment to fight hate speech,” said Morocco’s Permanent Representative to the UN Omar Hilale at the forum.

Morocco, under the leadership of King Mohammed VI, works tirelessly to strengthen the values of peace, harmony and respect for cultural and religious diversity, at national, regional and international levels, the Moroccan diplomat said at the forum organized at the initiative of the President of the UN General Assembly under the theme: “Transformative Role of the Culture of Peace: Promoting Resilience and Inclusion in Post-Covid Recovery”.

He underlined that the culture of peace is the very raison d’être of the UN, because it embodies the three pillars that guide its action, namely: development, peace and security and human rights, reiterating Morocco’s support to the UN efforts to make the promotion of a culture of peace and dialogue between religions and cultures, the focus of attention of the entire international community.

“To meet the many challenges that our world is currently facing, including the rise of ideological conflicts, intolerance, identity-based withdrawal, violence and extremism, the Kingdom of Morocco, as an active, responsible and dynamic player within the international community, is convinced that strengthening of multilateralism and collective and coherent action of our organization in favor of dialogue, pluralism and mutual respect, are essential,” he said.

In this regard, Omar Hilale highlighted the ancient tradition of Morocco in promoting intercultural, interreligious and inter-civilizational dialogue, being a melting pot of different cultures and civilizations.

“Respect for cultural and religious diversity is an integral part of the daily experience and collective consciousness of Moroccan society,” he said, recalling the historic visit of His Holiness Pope Francis to Morocco on March 30 and 31, 2019, at the invitation of King Mohammed VI, Commander of the Faithful, the second visit after that of Pope John Paul II in 1985. These visits are a strong and eloquent testimony to the leading role played by Morocco to promote dialogue, understanding, and cooperation between different religions and cultures.

Morocco also attaches fundamental importance to education and considers that it is a key element conducive to development, the maintenance of a culture of peace and the fight against the scourges of discrimination, hate, and extremism, he said.

“The Moroccan education system instills, from an early age, the virtues of respect, openness, diversity and human rights. In this context, textbooks and curricula are systematically and periodically reviewed to include the values of living together, harmony and tolerance,” Omar Hilale said, noting, in this connection, the recent decision taken by Morocco to teach Jewish history and culture in Arabic to Moroccan pupils, from primary school, starting the beginning of the current school year.

In order to highlight the just, noble and respectful values of the Islamic religion and to fight all forms of radicalism and extremism, Hilale recalled, moreover, the multiple initiatives carried out by the Kingdom, such as the reform of the religious field, the upgrading of religious education and the promotion of cooperation with brotherly and friendly countries, particularly in Africa, citing the establishment of the Mohammed VI Foundation of the Ulema, as well as the Mohammed VI Institute for the training of imams, morchidines and morchidates.