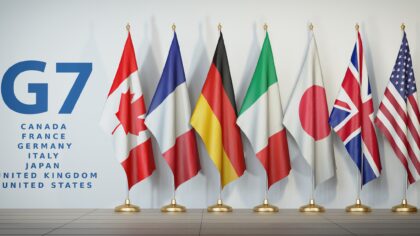 The Group of Seven also known as G7 through their various missions in Tunisia Monday called on President Kais Saied to propose a clear roadmap out of the ongoing exceptional measures including suspension of the parliament and seizure of the executive power that he has taken since July 25 in an alleged attempt to restore the North African country.
“We, the Group of Seven (G7), reaffirm our continued commitment to partnership with Tunisia as it develops the political and socio-economic structures necessary to meet the legitimate aspirations of its people for better living conditions and honest, effective and transparent governance. We strongly recommend an early return to a constitutional framework in which an elected Parliament plays a meaningful role,” said joint statement by UK, USA, Canada, Japan, Germany, France and Italy, plus the EU.
“We emphasize the urgent need to appoint a new Head of Government, to form a government capable of addressing the economic and health crises facing the country, and to create an inclusive space for dialogue on the proposed constitutional and electoral reforms. As this process takes shape, we call for a continued public commitment to – and respect for – the political, social, and economic rights of all Tunisians, as well as the rule of law.
“The sooner President Kais Saied provides a clear direction for the future that meets the needs of the Tunisian people, the sooner Tunisia can focus on addressing the economic, health, and social challenges facing the country. The Group of Seven remains committed to ensuring that shared democratic values remain central to our future relationship.”
Saied has thrown the North African into uncertainty with his measures that critics have branded a coup. The measures allowed by article 80 of the constitution to last for 30 days were extended until further notice, late last month.
Several critics have taken aim at the measures arguing that they are used for man hunt. Dozens of former state officials, lawmakers, business people and lawyers have been arrested or banned from traveling without clear charges. The G7 recommendations follow that those of US Democrat Senator Chris Murphy Saturday called on the Tunisian leader to bring back the North African country to the democratic path and swift end to the state of emergency.
Saied received Saturday a US delegation that included Murphy. The Tunisia President defended his move. “They speak of a coup d’état, but they do not understand the law and distort it. A coup d’état is done outside the constitutional framework while I applied a text of the constitution to preserve Tunisia from an imminent danger,” he stressed.