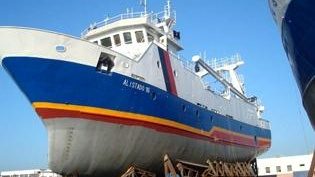 Two Moroccan architects working at a shipyard at Agadir harbor, Southwestern of the kingdom, have built a steel trawler fitted with state-of-art technology, Le360.ma reports.

The innovative system used by the architects working for Blue Wave; a shipyard company at Agadir harbor, is the second in the world, said Blue Wave’s administrative and commercial manager, Fayçal Mrabet El Tergh.

“This innovative propulsion system is the second of its kind in the world, having been used for the first time in the construction of a Dutch ship. It is known for its ability to limit the consumption of diesel and fuel used by 30%, and at the same time reduce carbon dioxide emissions,” El Tergh said.

The project that required $2.7 million (MAD25 million) was financially backed by the ministries of Industry & Trade, and of Agriculture & Maritime Fisheries.

Several clients from France, Senegal and Tanzania, have already commissioned production of the vessel.