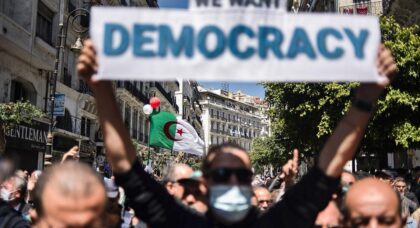 Headlines abound in international media and global think tanks deploring the state of play of Algerian blame games to hide a resounding policy failure by an unpopular regime.

When wildfires broke out in Algeria, the government’s reaction was to blame arsonists then political opposition groups and afterwards Morocco in a desperate scapegoating attempt that only highlights the Algerian predicament: an incapable and unpopular government.

The regime blamed the Kabylie independence movement MAK and Rachad Islamists for the fires and for the savage killing of a volunteer. The accusations were used as a pretext to crackdown on the two movements, the BBC wrote.

“Having dealt with the ‘domestic threat’, the regime moved a gear higher by announcing that next-door neighbor, and old regional rival, Morocco had been found guilty of fomenting trouble for Algeria,” the Algerian regime said without offering whatever evidence, wrote Magdi Abdelhadi in an opinion piece on the BBC entitled Algerian blame games expose deep political crisis.

“Critics were quick to point out that scapegoating Morocco and domestic opposition groups is an old tactic to divert attention from the regime’s spectacular failure in dealing with domestic problems such as the forest fires, the Covid-19 pandemic, and the lack of jobs,” he said.

As the living conditions of ordinary Algerians worsen, the crackdown of the coercive Algerian apparatus steps up amid a media blackout typical of a tyrannical state like North Korea.

“Although it is not in the same league as that in Pyongyang, ask any of the thousands who have taken to the streets in Algeria since 2019 and they will concur that their regime is neither democratic nor popular,” the author of the opinion piece said.

In an attempt to blame the media last month as infections peaked amid a severe shortage of oxygen for seriously ill patients, “the government issued directives to the media to play down “the bad news”.

Scapegoating Morocco and domestic opposition will not however help Algeria’s military junta provide bread and water to an increasingly restive population.

“Their anger has its roots in the failure of the post-independence state to deliver a decent standard of living and political freedoms,” said Abdelhadi on the BBC.