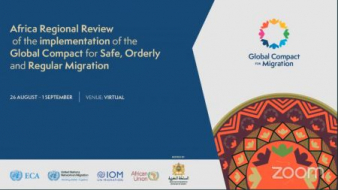 Africa has positioned itself as a central player in the implementation of the Global Compact for Safe, Orderly and Regular Migration, said Wednesday Moroccan Foreign Minister Nasser Bourita.

Bourita mentioned recent major African measures that are markers in this regard, such as the effective establishment of the African Migration Observatory. This AU body – which is the very first to be based in Morocco – was born of a Royal Vision, King Mohammed VI, being the Leader on the Issue of Migration in Africa, and supported by the African Agenda on Migration, he said.

“The Observatory is also a direct result of the Marrakech Compact, and in particular of its first objective, which is to collect and use accurate and disaggregated data as a basis for evidence-based policies,” he added during this conference held virtually August 31-Sept.1.

He also mentioned as a second major measure Africa’s notable participation in the Multi-Stakeholder Migration Fund, a mechanism set up to assist countries in the implementation of the Compact.

Actually, 16 of the 39 projects – 41% of the total number of projects selected for funding – were submitted by African countries, the minister noted, adding that Africa has also distinguished itself with 4 collective projects, thus giving an example of concerted regional management, which the Global Compact calls for.

Migration in Africa is primarily a regional issue. Therefore, it must first be addressed at the level of the continent’s states and each of its subregions.

“This is the source of Morocco’s early awareness that effective implementation of the Marrakech Compact at the regional level begins at the national level.”

In launching its National Immigration and Asylum Strategy in 2013, Morocco wanted it to be both responsible and supportive, and it is this same approach that it pleaded for in the African Agenda for Migration in January 2018 and the Global Compact in December of the same year, Bourita said, adding that this coherence between national, regional and global commitment is a way to get as close as possible to the goal of optimizing migration instead of fighting it.

Touching on the impact of the pandemic on migration, Bourita said the health crisis economic and social consequences have increased the precariousness of migrant workers, and at the same time slowed down mobility in general.

“The closure of borders has dried up migration routes for a time, making crossings even more perilous. But it has not, for all that, destroyed the morbid trade of smugglers and other merchants of misery.” From the point of view of governments, the pandemic has undoubtedly made migration governance more complex, he said, adding that it has been useful in that it has underlined the centrality of the Marrakech Compact and reminded everyone of the universal relevance of its objectives.

Indeed, the crisis has strongly emphasized the importance of regularizing the situation of migrants, and the need to guarantee their access to social welfare, and to security in general, Bourita explained, underscoring that “migration in times of pandemic has imposed itself as a crisis within the crisis – except that migration is not a crisis, but a structurally sustainable phenomenon.”

The real pitfall is that migrants are the forgotten ones in development, pandemics and social equity, he deplored, noting that the real purpose, in short, is to ensure that migrants are the real center of gravity of responsible migration policies, in solidarity, and in accordance with the 23 objectives of the Compact.

This first intergovernmental conference for the African Regional Review on the implementation of the Global Compact for Safe, Orderly and Regular Migration is jointly organized by the United Nations Network on Migration, the Economic Commission for Africa (ECA) and the International Organization for Migration (IOM), in partnership with the African Commission.

Representatives of African states have called for the establishment of a framework of bilateral cooperation as well as targeted public policies to support the integration of migrants and their contribution to development.