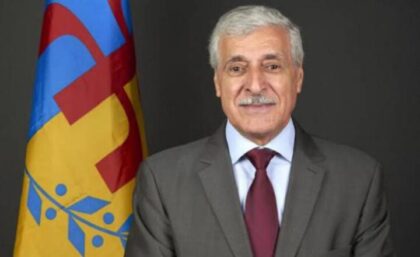 French authorities have rejected categorically an Algerian request for the extradition of Ferhat Mehenni, president of the provisional government of Kabylie and leader of the Movement for the self-determination of Kabylie, a movement set up in France to demand the territory’s independence.

Mr. Mehenni lives currently in France where he has been benefitting from a political asylum status for more than 20 years.

Algerian justice has launched an international arrest warrant against Mehenni, leader and founder of the Movement for the self-determination of Kabylie, (known by its French acronym MAK), listed as “terrorist” by the Algerian regime.

Mehenni is a former singer and activist for the Berber cause since the 1970. He was member of the secular opposition party RCD (Rally for Culture and Democracy), founded in 1989.

Due to political differences with Saïd Sadi, founder of the RCD, he left the party in mid-1995 to pursue his career as a singer and advocate of the independence of Kabylie.

In 2006, an international arrest warrant was issued against him by the Algerian justice but France ignored the request.

Present mainly in the restive Kabylie region, known for its long-history of dissent and oppression by a military junta, the MAK militants organize regularly protest marches and demonstrations to demand the end of the Algerian occupation and call for the independence of all Kabylie regions from Algeria.

MAK members are systematically targeted by Algerian forces, prosecuted, tortured and constantly intimidated, with Algerian state-owned media outlets accusing them of seeking to sow chaos and destruction in the country, while Ferhat describes the Algerian power as a “cruel, authoritarian and oppressive” regime.

The Kabyle provisional Govt. in exile and the MAK have filed mid-August a complaint with the International Criminal Court (ICC) against President Abdelmajid Tebboune and General Said Chengriha for committing genocide in Kabylie and for using Covid-19 and forest fires as tools to carry out “widespread ethnic cleansing”.

The plaintiffs cite in this regard the selective arrests, detentions, prosecution, unfair trials, and condemnation of Kabyle leaders and militants targeted by the Algerian authorities.

They also cite the systematic repression and muzzling of Kabyle vocal opponents in addition to banning demonstrations in Kabylie region, hard hit by deadly forest fires and the coronavirus.

Awaiting the ruling of the ICC, France’s refusal to hand Ferhat Mehenni over dealt another blow to the Algerian rulers. After such a humiliating setback, many analysts wonder whether the Algerian regime will challenge its former colonial power and take the risk of cutting diplomatic ties with France as it did with neighboring Morocco.