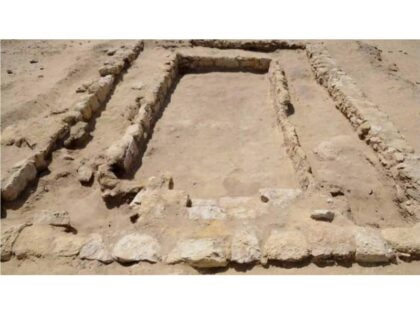 Egypt has announced the discovery, in the city of Alexandria, of the remains of “residential and commercial” areas dating back to at least the second century BC, and the fossil of a new species of amphibian whale dating back 43 million years in Fayoum, south of Cairo.

In a statement posted on Facebook, the Egyptian Ministry of Antiquities said that these suburbs, discovered after nine months of excavations by an Egyptian archaeological mission in the district of Chatbi, in the current center of Alexandria, had a “residential and commercial” function.

Preliminary studies on the apparent remains have revealed “that they consisted of a main street and adjacent streets connected by a sewer system, director of the Supreme Council of Antiquities, Mostafa Waziri, was quoted in the statement as saying.
Peripheral to the ancient capital of the Greek and Roman dynasties, these districts were frequented from the end of the Ptolemaic period and until the middle of the Roman domination of Egypt, a period running from the second century BC to the fourth century AD, said the official.

Archaeologists have uncovered a large number of wells cut into the rock and a network of water tanks, the statement continues. They also discovered half of an alabaster statue representing “an unidentified Roman emperor”, 700 ancient coins, numerous amphorae, amulets, dishes and tools.