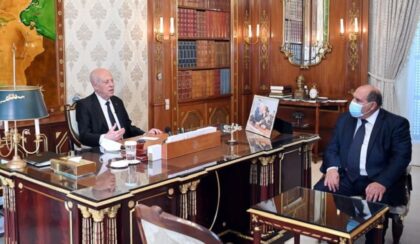 The Tunisian President Kais Saied is at it again! On Tuesday he branded the parliament as a “danger” for the state as he criticized corruption of lawmakers and state officials of the previous governments.

Saied made the remark as he received Mohamed Boussaïd, the minister of trade and exports development, to discuss ways to put an end to monopolies and encroachment of distribution channels, reports say.

Recalling his decision to renew, until further notice, the exceptional measures announced on July 25, including freezing the Parliament, he said the parliament «represents a danger» to the State.

«Parties have diverted money intended for the country to their benefit and to accounts in Switzerland,» he indicated, stressing that all the facts and names «involved» in these actions will be revealed one day.

He nonetheless aimed at the Speaker of the parliament, Rached Ghannouchi, who, he said, allegedly has 80 million euros or dollars in Luxembourg.

“The money received for years was redirected to Geneva, properties abroad … and then, in the evening it (the corruption lobby) comes to cry the fate of the starving and impoverished Tunisians and (ask) a national dialogue. A dialogue with whom? The cause of the Tunisians is clear and there is no question of going backwards. The day will come when I will reveal the whole truth to the Tunisian people and give all the names (…)”

Corruption comes from political corruption, he said, rejecting dialogue with the corrupt.

He described «the distribution channels» as «starving channels,» saying «the corruption lobbies are behind it,» according to TAP news agency.

He urged the Minister of Trade to «show firmness with these actors» to ensure that the law is respected.

The remarks came a day after he extended the suspension of the parliament and the immunity of lawmakers until further notice.

Saied suspended the activities of the legislature and the immunity of members of the parliament for 30 days on July 25 using the article 80 of the constitution which enables him to take such an initiative.