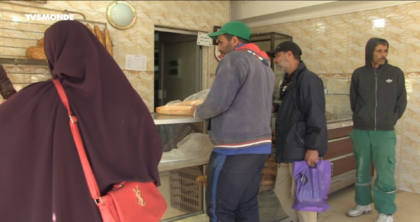 Algerians have to wake up early to be able to buy subsidized bread amid a shortage of flour in the oil-rich country, Algerian media wrote.

This scarcity of flour sent prices of bread skyrocketing from 10 dinars to 20 dinars auguring ill for the purchasing power of most vulnerable groups in a country that failed to keep inflation in check.

Flour thus joins a list of vital goods such as drinking water, milk and cooking oil for which Algerians have to queue in a sign of deepening economic crisis.

Inflation made the wage hikes by the government in recent years insignificant amid an acute liquidity crisis that made queues before banks and post offices an ordinary scene in Algerian cities.

The economic crisis was reflected in a rise of illegal migration attempt to Europe. Figures released by the EU border control agency showed that 67% of illegal arrivals into Spain so far this year were Algerians.

As Algeria drags its feet on reforms, combustible material piles up. Protests against social and economic conditions could soon take a political aspect as the government intensifies its crackdown on dissent.