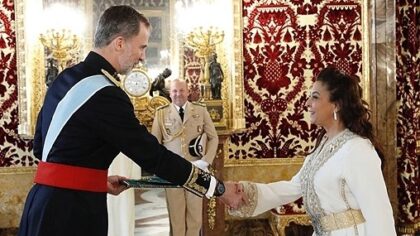 Moroccan ambassador to Spain Karima Benyaich is expected to return to Madrid nearly four months after she was recalled by her country for consultation on May 18, 2021 amid strained Moroccan-Spanish relations over Madrid’s decision to secretly host Polisario leader in connivance with Algiers.

The announcement of the imminent return of the Moroccan ambassador to Madrid was made Sunday by El Pais daily, which cited diplomatic sources.

Although no date has been set for the return of Mrs. Benyaich, the Spanish newspaper said the Moroccan diplomat would return to her post “in the coming days” after the remarks made by King Mohammed VI in his speech on the occasion of the 68th Anniversary of the Revolution of the King and the People on Friday.

In this speech, the Monarch spoke about Moroccan-Spanish relations, saying the countries are about to “usher in a new, unprecedented phase in the relations based on trust, transparency, mutual respect and the fulfillment of obligations”.

Spanish Prime Minister Pedro Sanchez welcomed the Moroccan Sovereign’s stand as “a great opportunity to redefine relations between the two countries and the pillars on which they are based”.

The Spanish daily stressed that one of the diplomat’s first missions after her return to Madrid would be to prepare the Moroccan-Spanish high-level meeting, which was initially scheduled for Dec.17, 2020 in Rabat. The meeting was postponed twice due to coronavirus pandemic and some political issues including the Western Sahara.

After ex-US President Donald Trump signed in December 2020 a presidential proclamation recognizing Morocco’s full sovereignty over its entire Sahara territory, Madrid issued a statement saying the Sahara issue can only be resolved through international consensus. Such a statement irked Morocco which was expecting a supportive stand in view of the deep and strong relations existing between two neighbors sharing several geostrategic interests.