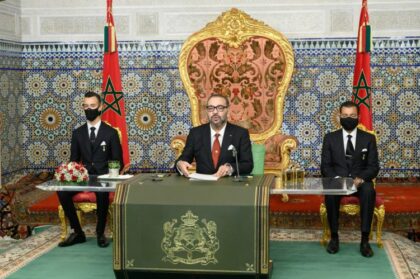 Morocco has been recently targeted by attacks planned and hatched by some countries and organizations known for their hostility towards the Kingdom, a country steeped in history, said King Mohammed VI, indicating that these countries concocted a full-fledged campaign to distort the image of Moroccan security institutions and undermine their usefulness and effectiveness in preserving Morocco’s security and stability.

“Morocco is a target because it is a country steeped in history – it has existed for more than twelve centuries, not to mention the nation’s longstanding Amazigh history – and it is governed by a citizen-based monarchy which has existed for more than four centuries, and which is rooted in a solid bond between the throne and the people,” said the Sovereign in a speech he delivered Friday evening on the celebration of the 68th anniversary of the Revolution of the King and the People.

The Royal speech actually comes at the end of an unprecedented episode of fallacious accusations to which Morocco responded with firmness to thwart all tendencies that aim to destabilize it or to discredit its action and its position.

The King made it clear that Morocco is also a target because of the security and stability and the sterling reputation and indisputable prestige it enjoys. “These are invaluable assets, especially in light of the upheavals characterizing today’s world,” the Sovereign said, noting that “the Kingdom also has a solid network of relationships and connections and is a trustworthy, credible nation at the regional and international levels.”

Like some other countries of the Arab Maghreb Union, Morocco is the target of deliberate, hostile attacks, the King insisted, adding that the enemies of the Kingdom’s territorial integrity build their positions on ready-made, yet obsolete, premises and do not want Morocco to remain free, strong and influential.

Regrettably, a few countries, especially European ones, which are traditional partners, fear for their economic interests, markets and spheres of influence in the Maghreb region, he went on to say, noting that some of their leaders fail to understand that the problem does not lie in the systems of Maghreb countries, but in their own.

“These are systems which continue to feed on the past and cannot stay abreast of new developments. Recent months have shown that these countries are facing significant inadequacies when it comes to respecting the state’s institutions and its basic, traditional functions,” King Mohammed VI stated further.

“Therefore, they want us to become like them. And to that end, they invoke unfounded pretexts and accuse our national institutions of failing to uphold rights and freedoms in order to tarnish their reputation and try to undermine the esteem and great respect enjoyed by our country,” the king pointed out in his speech.

They do not want to recognize that the rules of the game have changed – that our countries are able to manage their own affairs and use their energies and resources for the benefit of their peoples.

Thus, all possible means – legal and otherwise – have been used, roles assigned and tremendous resources leveraged to embroil Morocco in problems and disputes with some countries. In fact, some reports have really crossed the line. Instead of calling for Morocco’s efforts for balanced development in the region to be supported, they made recommendations to impede Morocco’s progress, arguing that its development creates an imbalance among Maghreb countries.

Furthermore, they concocted a full-fledged campaign to distort the image of our security institutions and undermine their usefulness and effectiveness in preserving Morocco’s security and stability. These institutions also provide support and coordinate action at the regional and international levels, as acknowledged by a number of those countries themselves. And since every cloud has a silver lining, the plots hatched by the enemies of our territorial integrity only enhance Moroccans’ faith and their resolve to continue defending their homeland and its interests.

Whether those parties like it or not, we shall continue on the path we have chosen for ourselves, despite the enemies’ exasperation and the envy of those who hate us, the Soivereign underlined.

“Some people claim that Morocco is being attacked because it has changed its political and strategic direction, or because of the way it is handling some diplomatic issues. That is simply not the case. Morocco has, indeed, changed, but not in the way they want it to. Morocco does not accept that its best interests be trampled on. At the same time, my country is keen to have strong, constructive and balanced relations, especially with our neighbors.”