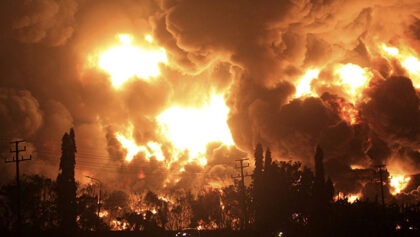 The toll of the fires ravaging northern Algeria, especially Kabylie, continues to grow heavier. At least 42 people, including 17 civilians and 25 soldiers, have lost their lives due to asphyxiation after fires ravaged vast areas of the Kabylie region, where an independence movement is growing.

The fires, which started Monday evening, killed 17 civilians, including 12 in Tizi Ouzou, according to a new assessment provided by authorities.

Spokesman of the Anavad, or the Kabylie government in exile, accused the military regime in Algiers for the simultaneous blazes that pushed many people out of their villages.

The forests and farms surrounding Tizi Ouzou have been leveled by the uncontrollable fires whose smoke added to the suffering of thousands of Covid-19 patients amid an acute oxygen crisis in the oil-rich country.

Images and videos posted on Facebook showed the scale of the destruction but many had to delete the shocking videos as the government intensifies its crackdown on dissent and free speech on social media.

Algeria is the latest Mediterranean country to be hit by wildfires, after blazes hit Greece, Turkey and Cyprus.