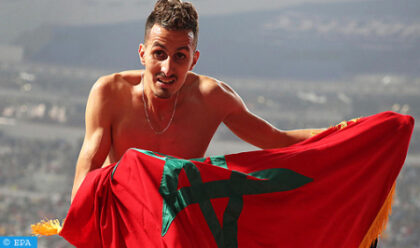 King Mohammed VI has sent a message of congratulations to Olympic athlete Soufiane El Bakkali, who won on Monday the gold medal in the 3,000 m steeplechase at the Tokyo 2020 Olympic Games.

In this message, the King expressed his warm congratulations and appreciation for El Bakkali’s great Olympic achievement, saying the Moroccan athlete’s win “came to crown the tremendous efforts” he has been making to attain best achievements.

“As we commend this well-deserved global crown, with which you raised the flag of Morocco in this prestigious international event, we wish you success and brilliance in your rich sporting career,” the King stated, assuring the athlete of his high solicitude.

El Bakkali’s performance Monday in Tokyo made him the first non-Kenyan athlete to win an Olympic gold medal in that category since 1980.