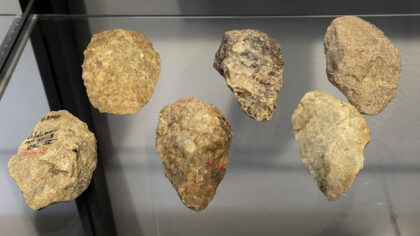 The discovery pushes back by hundreds of thousands of years the start date in north Africa of the Acheulian stone-tool industry, associated with the human ancestor Homo erectus, researchers said at a news conference.

Previously, the presence in Morocco of the Acheulian stone-tool industry was thought to date back 700,000 years.

This “contributes to enriching the debate on the emergence of the Acheulian in Africa,” said Abderrahim Mohib, the co-director of the Franco-Moroccan prehistory of Casablanca program.

The Moroccan archaeologist Abdelouahed Ben-Ncer called the news a “chronological rebound”. He said the beginning of the Acheulian in Morocco is now close to the south and east African start dates of 1.6m and 1.8m years ago respectively.

Mohib said the study also made it possible to attest to “the oldest presence in Morocco of humans” who were “variants of Homo erectus”.

In 2017, the discovery of five fossils at Jebel Irhoud in Morocco, estimated at 300,000 years old, overturned evolutionary science when they were designated Homo sapiens.

Newer PostMorocco’s order of 25 F16 on track to meet deadline
Older PostMorocco wants to dethrone China, India as most competitive automobile industry by 2025