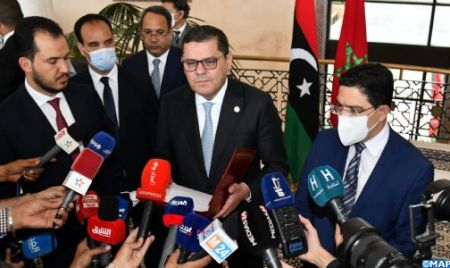 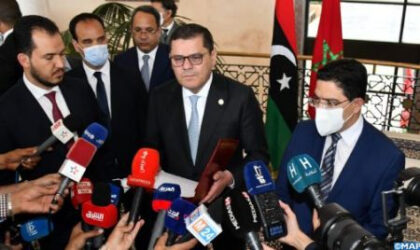 Morocco has opened its arms to all Libyan stakeholders to facilitate a mediation without interference in a way that would usher Libya’s political stability, unity and welfare.

Few days after the key visit by Speaker of the Libyan Parliament Aguila Saleh to Morocco, the Libyan Prime Minister Abdelhamid Dbeibah was in Rabat this Sunday where he held talks with Foreign Minister Bourita.

The themes discussed were the same as with the HoR Speaker: pooling efforts in order to organize elections on December 24.

Holding such elections “will allow Libyans to enjoy stability, put an end to foreign presence, and achieve development,” Bourita said at a joint press conference with Dbeibah following their talks.

He said Morocco undertakes mediation efforts in implementation of Royal directives to maintain ties with all legitimate Libyan bodies.

Bourita has on multiple occasions made it clear that the solution to the Libyan crisis can only emanate from Libyans themselves and has always rejected foreign interferences in the Maghreban country.

Thanks to its credibility, Morocco enjoys the trust of Libyan parties and hence has a key role to play to help Libyans restore peace and stability, he said.

“This visit reflects deep gratitude to King Mohammed VI for the efforts made to unify Libyan institutions and ensure Libya’s political and security stability,” said Dbeibah on his part.

He said the two countries will soon hold a joint commission on consular affairs in Morocco to facilitate visas for students and residents.

The Libyan official also laid emphasis on reviving the Maghreb Union, much needed to join efforts in order to address common challenges in the region.