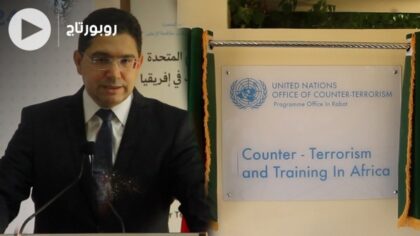 The headquarters in Rabat of the regional hub of the United Nations Office of Counter-Terrorism (UNOCT) destined for counterterrorism training and cooperation in Africa were inaugurated Thursday at a ceremony attended by Moroccan Foreign Minister Nasser Bourita and, by videoconference or in person, by a number of senior UN officials and representatives of the diplomatic corps accredited to Morocco.

The ceremony was broadcast by video conference to allow participants in the second Counter-Terrorism Week in New York to follow the ceremony’s proceedings.

The new UNOCT agency will develop and implement accredited programs that focus on capacity building and skills development in the area of counterterrorism, including security, investigation and prosecution, prison and border management, disengagement, rehabilitation and reintegration.

It will rely on the pooling of the expertise of Morocco and UNOCT in order to provide quality training for the benefit of African States, according to a collaborative and supportive approach reflecting a spirit of collective responsibility.

At a press conference following the inauguration, Bourita said that the first six months in 2021 confirm the “alarming trend of increasingly dangerous development of the terrorist threat in Africa.”

Terrorism threats in the continent are more troubling than ever, he said warning that if terrorism was considered an external threat to Africa less than a decade ago, at present, “terrorism found a homeland in the continent.”

Bourita also warned that the Sahel-Saharan region is becoming the second most affected area in the world by terrorism.

“In fact, 2020 was the deadliest year in terms of terrorist violence in the Sahel with a death toll of 4,250, an increase of 60% compared to 2019,” he was quoted by the news outlet moroccoworldnews.com as saying.

At least four terrorist groups are active in Africa, “with a dozen of affiliated groups,” Bourita said.

The terror groups are active in more than 25 countries across the continent.

“The continent is not only the new ground of returning foreign terrorist fighters, but it has also become a self-homeland for terrorists.”

According to the news outlet, terror groups carried out 7,108 attacks that claimed the lives of 12,519 victims in 2020. The economic impact of terrorism in Africa over the past 10 years has amounted to $171 billion, including $13 billion for 2019 alone. The economic cost of terrorist violence has multiplied ninefold since 2007.

The FM renewed Morocco’s commitment to continue to work alongside the UN and other partners against the scourge of terrorism, expressing satisfaction with the opening of the UNOCT office in Rabat.

The office is part of the UN’s work and support to African countries in their efforts to fight terrorism and violent extremism.

The FM said that the establishment of the program office for Africa in Rabat is an “eloquent example of possible synergy between a Member State and the UN Secretariat to implement the UN global counterterrorism strategy.”

The opening of the office in Rabat falls “naturally within Morocco’s vocation and engagement towards Africa,” he said.

The choice of Morocco as a partner for the establishment of this Program Office is further proof of the confidence and esteem enjoyed by the National Strategy to Combat Terrorism and Violent Extremism.

The opening ceremony was marked by the online participation of the UN Under-Secretary General for Counter-Terrorism, Vladimir Voronkov, the Deputy Director of UNOCT, Mauro Miedico and Morocco’s Permanent Representative to the UN Omar Hilale.

In Rabat, the ceremony brought together the head of the new Program Office Carlos Reis; the United Nations Resident Coordinator in Morocco, Sylvia Lopez-Ekra; and the ambassador of Cameroon, doyen of African ambassadors accredited to Morocco, Mohammedou Youssoufou.

Morocco and the UN had signed the headquarters agreement for the establishment in Rabat of this UN Program Office in October 2020. The agreement reflects the ambition to pool efforts to meet the challenges posed by an upsurge in terrorist acts in Africa and mirrors Morocco’s position in the continent as a leader in the fight against terrorism.