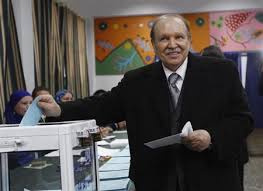 Questions have been raised among presidential candidates and former government officials on whether Algerian President Abdelaziz Bouteflika’s ailing condition would permit him to run a fourth term in office. Among those who raised concern is presidential candidate and retired Algerian Navy commander Mohamed Al-Taher .In his criticism against the election process he said “preparations for the election are underway on the basis of ensuring the success of the candidate of the ruling wing, in order to ensure their continuation in power, regardless of the cost to the country.”
Bouteflika suffered a mini-stoke last year forcing him to spend significant time in Paris for medical treatment. Back in Algeria, reports have stated he was suffering from partial paralysis. This has raised immense concern among Algerians as it may be detrimental to the country if he pursues another term in office.
The apparent disapproval of Bouteflika’s candidacy is not only fueled by his health status but by several decisions he has taken in the past to secure his grip on power. Among them were last year’s controversial government reshuffle and a 2008 constitutional amendment abolishing a two-term limit on presidential terms. It is also reported that he is seeking to “impose a successor of his choice” if he can’t run in the elections, to ensure that his supporters keep their grip on power. However, Taher claimed that Bouteflika “is not convinced about the people who are close to him and does not believe that they are capable of holding the presidency.”
Several ministers have urged the President Bouteflika to forgo the upcoming presidential elections.