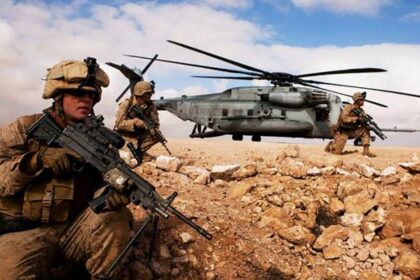 Morocco and the US ended the 2021 African Lion drills on June 17 with tactical exercises using live ammunition to improve interoperability of the participating armies near Tan Tan.

The last segment of the African Lion drills focused on honing the combat preparedness and responsiveness of Moroccan and US artilleries.

A key part of the closing of the exercise featured the deployment in the air of the U.S. Air Force F-16C Fighting Falcon aircraft from the 31st Fighter Wing and KC-135 Stratotanker aircraft which flew alongside Moroccan F-16s demonstrating partnership and capability to execute combined operations.

“The arrival of fighters and tankers adds another level to this already dynamic exercise,” said Gen. Jeff Harrigian, U.S. Air Forces in Europe-Air Forces Africa commander. “Every flight brings another opportunity to work closely with our partners and exchange best practices so we can better pursue our shared goals.”

Both air forces trained on refueling missions for the F-16Cs in a simulation of combat environment in Guelmim.

More than 7,000 participants from nine nations and NATO train together with a focus on enhancing readiness for U.S. and partner nation forces. AL21 is a multi-domain, multi-component, and multi-national exercise, which employs a full array of mission capabilities with the goal of strengthening interoperability among participants.

Besides Morocco and the US, The African Lion brings together armies of allied countries such as the UK, Canada, Brazil, Tunisia, Senegal, the Netherlands and Italy, as well as the Atlantic Alliance. Military observers from some 30 countries representing Africa, Europe and America attend the exercise, which is the largest in Africa.

This year’s drills were held in multiple locations in Morocco, including in Mahbes, about 40 kilometers from the rear base of the Algeria-based Polisario separatist militias. Mahbes was also the scene of a paratrooper deployment in an exercise that tests rapid reaction and mobilization.