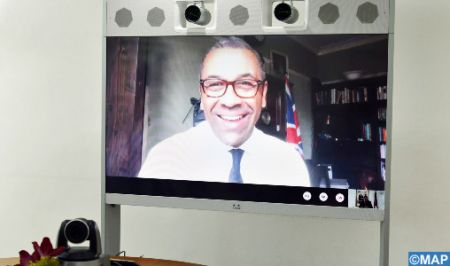 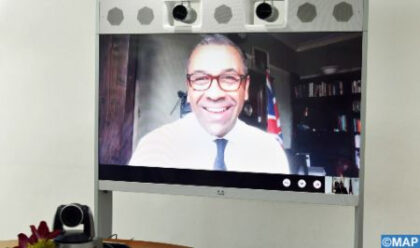 Morocco and the United Kingdom reiterated, on Friday, the importance of setting the priorities of a joint roadmap for the post-covid period in line with the Strategic Partnership between the two countries.

During a teleconference meeting between Minister of Foreign Affairs Nasser Bourita and Minister of State in charge of the Middle East and North Africa at the UK Foreign, Commonwealth and International Development Office James Cleverly, the two parties praised the excellent historical relations between the two Kingdoms and reiterated the importance of setting the priorities of a joint roadmap for the post-Covid period, commensurate with the Strategic Partnership between the two countries.

On this occasion, Bourita and Cleverly welcomed the current bilateral agenda marked by several events, in particular by the implementation of the post-Brexit Association Agreement, the activation of the Association Council and the programming of the 3rd session of the Strategic Dialogue, scheduled in London, said the Foreign Ministry in a press release.

The two officials highlighted the importance of strengthening the political dialogue and bilateral economic partnership, through new innovative areas of cooperation and new value chains, such as the green economy, particularly in the context of the upcoming COP26.

During this meeting, Cleverly lauded the insightful vision of King Mohammed VI which is distinguished by a dynamic of openness, progress and modernity, while welcoming the New Development Model adopted by the Kingdom and the promotion of extensive regionalization.

He also paid tribute to Morocco as a regional stability pole and a privileged partner in Africa.

In this regard, the two parties agreed on the importance of promoting triangular cooperation towards Africa, mainly in the economic and investment fields.

They also welcomed the coordination carried out by Morocco and the United Kingdom at the multilateral level and agreed to continue their consultations on regional and international issues of shared interest, in particular the situation in Libya and the Sahel.