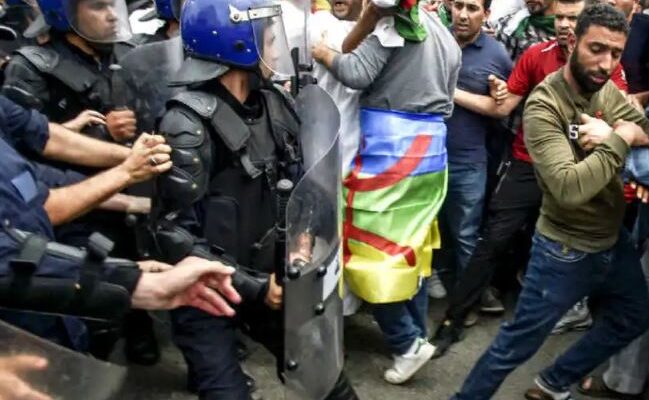 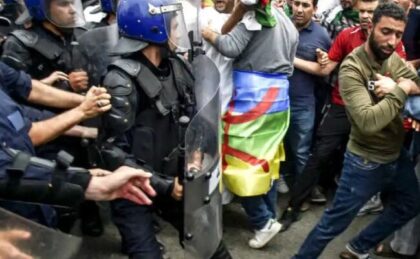 Critical voices are mounting against the Algerian regime and its attempts to stifle the peaceful demonstrations, known as Hirak, demanding a clean break with the military rule that left the country underdeveloped and dependent on oil revenues, democratic change, independence of the judiciary and construction of genuine legitimate institutions.

The Hirak that gained momentum in April after the lockdown imposed by the Covid-19 pandemic was not to the taste of the army, which has recently shown signs that it has no patience for dissent and threatened to deploy troops against civilians. The facade government, through which the army commanders rule, without governing, has warned protesters of facing dispersion and arrest and this is what happened these past days.

In this connection, violent clashes between protesters and security forces took place on Thursday in the town of Naciria, near Boumerdes (45 km to East of Algiers), and this Friday May 28, Algiers was completely locked down by a large-scale repressive security system. The orders were clear: arrest anyone who has direct or indirect links with the Hirak. Access to downtown Algiers was totally prohibited for the few journalists still independent in Algeria as the regime seeks to avoid that images, videos, or testimonies incriminating security forces be leaked out.

However, despite these strict orders, the tightened repression of Hirak participants and human rights activists was denounced by NGOs and even by Algerian lawyers.

In this connection, the Paris-based human rights watchdog Riposte Internationale denounced the “restrictions” on individual and collective freedoms, as well as on the right to demonstrate peacefully in the public space in Algeria, while holding the regime responsible for the “escalation” of “repression” and “intimidation”.

In a press release made public on Thursday, May 27, the NGO denounced the large-scale repression and reaffirmed its “full” and “entire” solidarity with all citizens, political activists, trade unionists and journalists.

Riposte Internationale also denounced the regime for having earmarked huge amounts of funds to the elections of June 12 as a time the country is facing an acute economic crisis.

The huge financial resources allocated to the electoral agenda of June 12, will only serve to endow the regime with a façade legitimacy, the NGO said.

Meanwhile, several defense lawyers of prisoners of conscience have denounced the systematic “violations” of human rights in Algeria in the run-up to the legislative elections on 12 June.

“The regime has intensified its repressive policy against the Hirak. We must all denounce these practices which constitute a dangerous drift,” several lawyers said during a press conference, adding that the Hirak is “criminalized” and “justice is involved in the confiscation of the fundamental rights of citizens.”

In this vein, attorney Abdeghani Badi denounced the detention of hundreds of prisoners of conscience who are languishing in Algerian jails just because they participated in the Hirak.

Another attorney, Mustapha Bouchachi, decried the continued deterioration of the human rights situation, saying that “the hour is serious” and that “the public opinion, the political class, the associations, the media and the unions, must be kept informed of these actions and practices which mobilize the whole security apparatus against the citizens.”

“The judicial and security apparatus is at the service of a dictatorial regime”, he denounced, noting that “only the regime is responsible” for this situation.

This crackdown on Hirak demonstrations is accompanied by a media blackout in the run-up to the June 12 legislative elections, which are rejected by a large majority of Algerians.

Under the orders of the nation’s strongman General Said Changriha, security forces continue to target political opponents, activists, journalists and internet users who call for a boycott of the controversial ballot.