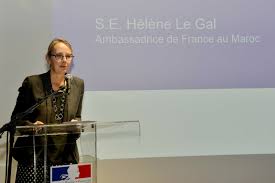 Morocco is a reliable country, which takes the fight against illegal migration “very seriously” and which “provides solutions that are costly”, said the French ambassador in Rabat, Helene Le Gal.

Securing a maritime border like that of Morocco, in addition to land borders, is something huge on the scale of the country, said the French diplomat in an interview with Arab News e-journal, in its French version.

Le Gal invited, in this context, the entire European Union to mobilize alongside Morocco in its efforts to fight illegal migration, a phenomenon that “concerns us all” she said.

“The EU must do more to support the countries that are in the front line (Mediterranean countries) in particular Morocco,” she said.

The French diplomat’s interview came on the morrow of the migratory avalanche on Ceuta, a Spanish occupied enclave, after Morocco relaxed migration control.

Moroccan FM Nasser Bourita explained that this wave was due to “a context of fatigue of the Moroccan police apparatus after the festivities of the end of Ramadan” but also to “the total inaction of the Spanish police”, which according to him, is deployed at a rate of one policeman for every one hundred Moroccan agents in the border areas.

In her interview, the French diplomat also brought up the Sahara issue, reiterating in this connection the position of her country, which supports a political solution under the auspices of the United Nations, on the basis of the Morocco-proposed autonomy plan.

“For us, this solution revolves around the autonomy plan, which was presented more than ten years ago by Morocco,” said the French diploimat, who stressed the need for the UN Secretary General to appoint a personal envoy to find a solution to this conflict “which has gone on for too long”.

The French diplomat expressed the hope that the U.S. decision recognizing the sovereignty of Morocco over its Sahara opens the door to progress in this issue, in order to find a peaceful solution acceptable to all, subsequently allowing the development of the southern provinces.

Referring to security cooperation and the fight against terrorism, the French ambassador in Rabat welcomed a Moroccan-French cooperation, “driven at the highest level and practiced daily by the competent services.”

A cooperation “that works extremely well” between two countries, which have the same interests and the same enemies, she said, citing particularly in this context the partnership in the fight against terrorism in the Sahel, but also on the Syrian-Iraqi scene.

“In the Sahel. France is strongly committed militarily, and we cooperate in an extremely strong way with Morocco in the fight against terrorism,” she said.

Le Gal also praised Morocco’s management of the COVID-19 health crisis, both in its early stages and during the vaccine research and vaccination phase.

“I think the policy in Morocco has been exemplary, in that the Moroccan authorities were able to anticipate (things) perfectly,” she said, adding that the Kingdom went in search of vaccines very early and was able to start its immunization campaign at the same time as most other Western countries, at a rapid pace.

“Morocco alone accounts for 95% of vaccinations in Africa. This is really extraordinary,” said the French diplomat, who has just been vaccinated in Morocco, to show the French that “we can trust our host country to treat us the same way it treats its own citizens, in a very responsible and serious manner”.