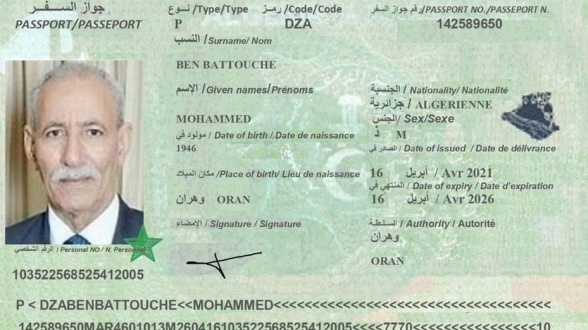 Brahim Ghali’s fabricated Algerian passport, the picture of the day 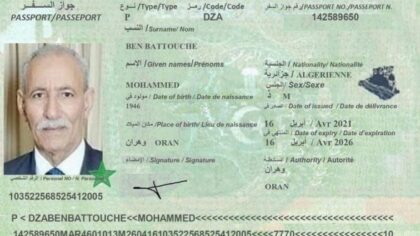 The copy of the fabricated Algerian passport which was used by the head of the Polisario, Brahim Ghali, to enter Spain under a false identity, has been published by several media, revealing, if need be, the scheme hatched by the Algerian intelligence services in connivance with the Spanish government.

This scandal at the origin of the current diplomatic crisis between Morocco and Spain, reveals in broad daylight the degree of involvement of Algeria in the Sahara issue and confirms that the Polisario does not and cannot exist without the Algerian regime’s backing.

Another proof that the Polisario and its leaders are mere puppets at the hands of Algeria surfaced when Brahim Ghali refused to sign the summons sent to him by the Spanish judiciary, saying that he has to refer to the Algerian embassy in Spain.

The Polisario separatist is summoned on June 1 in a war crime case.

Spanish radio Cadena SER, quoting police sources, revealed that Brahim Ghali, sued for several war crimes, was flown from Algeria under the false identity of Mohammed Ben Battouche, in an Algerian military presidential plane that landed at the military base in Zaragoza to avoid check-up and especially any media leaks.

The Spanish radio indicated that the Spanish government even gave a safe-conduct to his convoy to avoid any controls on the highway.

Another Spanish media, El Confidencial, reported Thursday that Brahim Ghali used two false identities to enter Logroño hospital. He was registered as Mohammed Ben Battouche, born on September 19, 1950, but in two medical records he was named Mohamed Abdellah, born on February 12, 1950. The date of birth mentioned in the fabricated Algerian passport, issued on 16 April 2021, is  1946.

Radio Cadena SER also noted that letting in the separatist leader was apparently a unilateral government decision, disapproved by security officials and that Spain’s interior ministry had reportedly considered another country to host Ghali, in an effort to avoid any diplomatic clashes between Spain and Morocco.

But the clashes did occur, Morocco having made it clear that hosting Polisario leader under a false identity is a “premeditated act” that will have consequences.

Ghali and other leaders of the separatist group are accused by human rights groups and several Sahrawis of genocide, murder, terrorism, torture and forced disappearances.