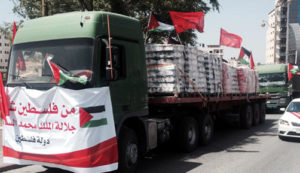 The emergency humanitarian aid, sent by Morocco at the order of King Mohammed VI, Chairman of the Al-Quds Committee, to the Palestinian population in the West Bank and Gaza Strip, started arriving aboard aircrafts of the Royal Armed Forces (FAR).

Two aircrafts loaded with basic foodstuffs, emergency medicine and blankets landed at Amman’s airport Sunday, while two other planes are expected to fly the assistance to Cairo.

This humanitarian aid, decided by King Mohammed VI, Chairman of the Al-Quds Committee, is part of Morocco’s permanent solidarity with the Palestinian people and support for the Palestinian just cause.

Morocco had already denounced in the strongest terms the violence targeting the occupied Palestinian territories, deeming that such violence will only deepen rifts, sow hatred and undermine peace efforts in the region.

“Morocco, which considers the Palestinian cause a priority issue, remains faithful to its commitment to achieving the two-state solution living side by side in peace through the creation of a Palestinian state within the borders of June 4, 1967 and with eastern Al Quds as its capital,” the Moroccan Foreign Ministry had said in a statement.

During the emergency meeting of the Foreign Ministers of the Organization of Islamic Cooperation held remotely Sunday to examine the aggressions perpetrated by the Israeli authorities in the occupied Palestinian territories, in particular in Al-Quds Acharif, Morocco reaffirmed its unwavering support to the Palestinian people’s legitimate rights and aspirations for freedom and emancipation, and called for increasing efforts to provide the conditions conducive to the relaunch of the peace process and overcome the current situation which affects security and peace in the region.

In her address, Moroccan Junior Foreign Minister Nezha El Ouafi, underlined that the escalation needs urgent international efforts to defuse the tension that ultimately only serves the forces of extremism, which advocate hatred and hostile ideas.

She pointed out that King Mohammed VI, in his capacity as Chairman of Al-Quds Committee, will continue to defend the particular status of Al-Quds, protect its Islamic character, preserve the sanctity of Al-Aqsa Mosque and defend the identity of this holy city as a land of coexistence between the three monotheist religions.

In this connection, the OIC Foreign Ministers commended, in the resolution adopted by the emergency meeting, the role of the Al-Quds Committee in the protection of the holy places of the holy city of Al-Quds.

They “welcomed the role played by the chairmanship of the Al-Quds Committee in the protection of the holy city and in thwarting the measures taken by the Israeli occupation authorities with the aim of Judaizing the holy city,” the OIC resolution stated.

The OIC resolution condemned in the strongest terms Israel’s brutal aggression against the Palestinian people and called for an immediate halt to Israel’s attacks on the Gaza Strip.

The OIC said it holds Israel “fully responsible for the deterioration of the situation caused by its systematic crimes against the Palestinian people across all occupied Palestinian Territories, in particular, the extensive barbaric military attack on the Gaza Strip.”

The resolution called on Israel to respect Muslims’ access to Al-Aqsa Mosque and to stop settlers from forcibly evicting Palestinian families from their homes.

The Arab Group at the United Nations also praised the important role of Al Quds Committee in defending the holy city and in supporting the Palestinian people.

This came during the urgent meeting of the Security Council on the situation in the Middle East held Sunday.

In an address delivered on its behalf by permanent representative of Algeria to the UN, Sofiane Mimouni, the Arab Group also underlined the importance of the efforts made by Bayt Mal Al-Quds Acharif Agency.

“The Palestinians, in general, and the Maqdessis, in particular, were the victims of campaigns of violence throughout the holy month of Ramadan in atrocious silence, which prompted the occupying authority to pursue its project of colonization, in defiance of international law,” the Arab Group underlined, urging the Council members to “take concrete steps towards a comprehensive ceasefire, including a cessation of all military operations.”