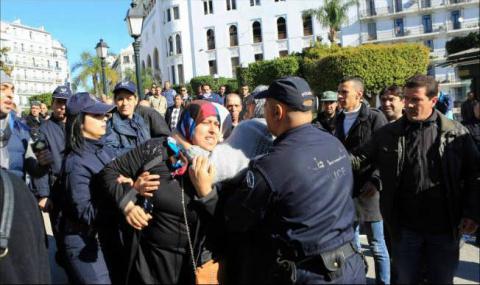 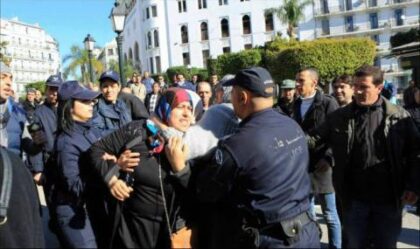 Thousands of Algerians took to the streets of different cities and towns across the country Friday to demand a clean break with the military rule that left the country underdeveloped and dependent on oil revenues.

However, the army has shown signs in recent days that it has no patience for dissent and threatened to deploy troops against civilians. The facade government, through which the army commanders rule without governing, has warned protesters of facing dispersion and arrest.

The streets leading to Algiers were blocked on Friday and marchers were met with violent crackdown as the regime seeks to stem the Hirak and prevent it from gaining traction.

Indeed, this Friday May 14 is a sad and sinister day in Algeria. The second day of Aid Al Fitr in 2021 coincided with an unprecedented massive crackdown on Hirak protesters, local media commented, noting that May 14 is the most violent day since the advent of Hirak on February 22, 2019 and that more than 900 violent arrests have been reported and deplored across more than 23 wilayas, according to a provisional assessment.

In Algiers, all the police stations were overcrowded with arrested citizens. There has never been such a heavy toll of mass arrests in Algiers among the ranks of the participants in the Hirak.

This day marks an unprecedented event in Algeria where the regime has decided to harden its “war” against a completely peaceful popular protest movement, democracy activists say, adding that Algerian journalists and correspondents of international press agencies were among the lot of those violently arrested.

Authorities also targeted independent media to prevent reporters from covering the protests. Critical journalist Khalid Drareni who was arbitrarily detained for covering the Hirak was arrested once again.

Another young journalist Kenza Khatou was also taken into custody by the police while the images of her very violent arrest were massively shared on social networks, where she is one of the most followed young Algerian journalists, thus sparking national indignation. These images scandalized Algerians because they show the very violent behavior of the police officers who brutalized a young journalist.

Kenza Khatou, whose behavior in no way constituted an offense against public order, was quickly brought before a public prosecutor in an Algerian court.

However, the hundreds of arrests and the security forces’ unprecedented violence did not dissuade resolved protesters from making their voice heard in the streets of the capital and other Algerian cities.

“You can do whatever you want. We will not stop” chanted protesters who also repeated their iconic demand for a civilian state.

Lacking persuading responses to address the grievances of Algerians, offer jobs and increase wages, the Algerian government has also been castigated by rights groups for its excessive use of force against protesters.

The regime’s tolerance for dissent has come to an end as it continues dismissing anyone who doesn’t agree with its failed policies as a traitor serving foreign entities.

Few days ago, the Office of the United Nations High Commissioner for Human Rights (OHCHR) reiterated its deep concern over the deterioration of the human rights situation in Algeria and the continued crackdown on the Hirak. The OHCHR spokesman Rupert Colville denounced “the use of violence to disperse peaceful demonstrations” and “the arbitrary arrests and detention of people who have exercised their rights to freedom of opinion, expression and peaceful assembly”, and urged “the Algerian authorities to stop using violence to disperse peaceful demonstrations and to halt arbitrary arrests”.

Other human rights watchdogs have also called on Algeria to halt police violence against peaceful protesters demanding a clean break with the corrupt military regime that has confiscated power since Algeria’s independence.

The military junta is now tightening its authoritarian rule on fear, waving the stick against protesters while exaggerating its recourse to conspiracy theories drawing derision.