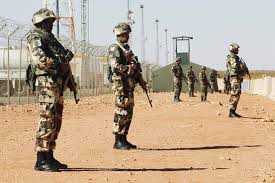 Algeria:‘’In Amenas’’ gas plant back to full capacity in weeks

After last year’s attack on the ‘’In Amenas’’ gas plant by Islamist militants, which left 39 foreigners and one Algerian dead during a four-day siege, it has been reported that the gas plant will be fully functional within weeks. The plant used to produce about 11,5% of Algeria’s natural gas output before the attack. The plant’s site has a capacity of 30 million cubic meters per day but is presently producing 20 million cubic meters and foreign expatriates are reluctant to return to the site.
Confirming the developments, senior adviser to Algeria’s energy minister Ali Hached said that “two thirds of capacity is already on stream and the last unit will start in a few weeks so In Amenas will be back at full capacity in a few weeks.” Foreign workers are yet to return because of unresolved security concerns.
British Petroleum (BP), which operates the plant alongside Norway’s Statoil and Algeria’s state-owned Sonatrach, is holding back on foreign contractors despite assurances from Algerian officials. New security reinforcements and a landing pad have been added by the Algerian officials at the desert complex.
In the same light, Statoil has permanently sent its staff to its operational center at Hassi Messaoud and returning to In Amenas would take some time. The companies “would eventually go back to sites at In Salah and In Amenas,” expressed Hached, but at the moment they are “returning their staff to sites deep in the desert, starting with oil and gas producing complex Hassi Messaoud.”
The attack on In Amenas also stalled development plans aimed at increasing the productivity of the plant. BP Chief Executive Bob Dudley said the expansion projects at In Amenas and In Salah have been postponed without giving any further details.

North Africa Post's news desk is composed of journalists and editors, who are constantly working to provide new and accurate stories to NAP readers.
NEWER POSTMorocco: Territorial Management, no Longer the Preserve of Men
OLDER POSTMauritania : A New Investment Hub for Arab FDI?