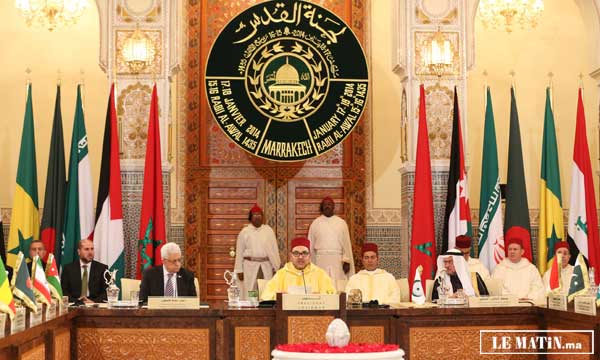 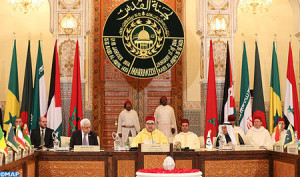 Morocco has stressed the need to foster trust between the parties to the Middle East peace process and urged these parties to show the much needed sense of realism and spirit of compromise in order to push forward the peace process.
The call was launched by Morocco’s King Mohammed VI during the opening of the 20th session of the Al Quds (Jerusalem) Committee held in Marrakesh this January 17-18.
“We call on the parties involved (in the Middle East peace process) to strengthen trust between them, abstain from any provocative act which might derail the peace process and to show a sense of realism and a spirit of compromise to make sure the negotiations are successful,” said the king who is the chairman of the Al Quds Committee, an offshoot of the Organization of Islamic Cooperation (OIC).
The King urged all parties to be aware of the looming dangers and to join efforts to counter extremism and obscurantism.
“We have to remain vigilant and to join efforts in order to foil the schemes of extremist, obscurantist groups which seek to exploit the lofty cause of Al Quds so as to fan the flames of violence and terrorism in the region,” he said, pointing out that to deal with the situation, “we must consolidate Arab and Islamic joint action, close ranks and adopt innovative measures to effectively contribute to substantiating the desired peace.”
After he called for a pragmatic, efficient strategy, in which the Al Quds Committee would play a crucial role as a permanent mechanism of the OIC, the Committee’s chairman warned that “we cannot defend the holy city against Judaization schemes nor support its steadfast inhabitants through empty slogans or the exploitation of this lofty cause for pointless outbidding purposes.”
The Moroccan ruler insisted that Jerusalem is the core issue of the Palestinian cause, and that no peace is conceivable without an agreement on the final status of East Al-Quds as the capital of the independent Palestinian State.
For peace to be achieved, he added, Israel must fulfill its obligations, especially with respect to the Road Map adopted by the International Quartet and endorsed by the Security Council, as well as the prospects opened up by the Arab Peace Initiative.
After he recalled that this 20th session of Al Quds Committee is being held amidst an increasing international consensus on the need to show greater support for the peace process, the king paid tribute to the “untiring efforts” made by the U.S. administration to push forward the peace process, under the stewardship of President Barack Obama and the supervision of Secretary of State John Kerry.
The Jerusalem committee meeting is actually taking place while the US administration is making a new attempt to broker a peace deal between Palestinians and Israelis.
Secretary of State John Kerry who visited the Middle East region several times over the past few weeks in this context submitted to the two parties, during his latest visit on January 6, a draft “framework agreement” outlining the broad lines of a final settlement on pending issues. It is however widely thought that his chances of success are not very high.
For Morocco’s king, these efforts have without any doubt given fresh, constructive momentum to the peace process. However, he said, the success of this dynamic hinges on the adoption of a comprehensive approach in which all final settlement issues are addressed on the basis of a clear frame of reference and within a specific timeline.
Mohammed VI then stressed the need for this meeting of the Jerusalem Committee to come up with innovative measures to confront the aggressive policies endured by the steadfast Palestinian people, as well as the settlement policies and the violations perpetrated against Al-Quds al-Sharif and the holy Al-Aqsa Mosque.
Practical, well-thought-out proposals and realistic initiatives, with precise implementation means and funding mechanisms, are also required, he said.
Moroccan officials had explained that the Jerusalem committee session seeks to send a strong message to the international community to prompt it to shoulder its responsibilities by compelling Israel to stop all its lawless practices seeking to alter the identity of the city and consecrate the fait accompli on the ground, mainly through the building of new settlements. Despite repeated outcries and warnings that the expansion of settlements undermines peace negotiations, Israel is stubbornly pursuing this settlement policy and has just announced, earlier this month, a project to build over 1,800 housing units in Israeli settlements, including more than a thousand units in occupied East Jerusalem.
The meeting, which is attended by the Palestinian president, the foreign ministers of the committee’s member states and representatives of the United Nations, the European Union and the Arab League, is therefore focussing on these practices that are contrary to relevant international laws on occupied territories and that hamper the overall peace process.

North Africa Post's news desk is composed of journalists and editors, who are constantly working to provide new and accurate stories to NAP readers.
NEWER POSTThe Storm Is Not Over Yet:Increasing Instability in the Sahel
OLDER POSTJerusalem Committee to Send Strong Message to Israel