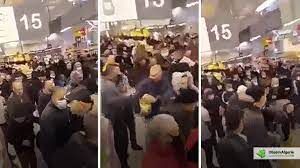 Cooking oil has become a rare commodity in Algerian stores forcing people to wait in long queues before stores and to strict rationing. Stampedes were seen across the country as people panic while waiting for this consumer good.

Algerian officials, including President Tebboune, have long attempted to hide the sun with a sieve by denying the existence of a shortage in vegetable oil supply at the gates of the holy month of Ramadan where usually this cooking element is on high demand.

One thing Algerian officials are good at is scapegoating. They quickly pinned the crisis on retailers, accusing them of speculation to rise prices and make profit.

In an image that can only be seen in refugee camps or war-stricken countries, a long queue massed in Mila in the region of Jijel where authorities organized a distribution of 5-liter bottle of oil a stampede was propelled as people flocked in.

The stampede left many injured especially among the elderly and women who came in to have access to this consumer good which has become rarer in oil and gas-rich Algeria, several Algerian media reported.

« Algeria has never seen such a panic related to access to foodstuff since the 1990s during the black decade, » said Algeria-part.

Algerians are doomed to queue this day due to a failing government. Besides stores selling cooking oil, longer queues can also be seen in post offices and banks amid a liquidity crisis.