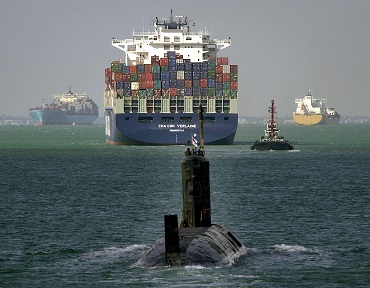 Egypt values compensation for Suez Canal blockage at over $1bn

Traflagar Class nuclear submarine HMS Triumph, is pictured transiting the Suez Canal in a convoy in 2001.
After the 9/11 attacks in the USA, Triumph, along with her sister-ship Trafalgar, formed part of a task group in 2001 as part of the American-led invasion of Afghanistan in 2001, Britain’s contribution being known as Operation Veritas.

Egyptian authorities expect to get more than $1 billion from Ever Given to cover damage and losses incurred in operations to float the mega ship that blocked the vital waterway for several days.

The chairman of the Suez Canal Authority (SCA), Osama Rabei told media that the authority launched Wednesday probe into the incident that forced suspension of navigation through the canal.

The authority had ordered temporal halt passage through the canal after 400-meter long Ever Given ship heading to the Netherlands got grounded in the canal on March 23.

The SCA mobilized international companies and 800 workers to help refloat the ship and allowed navigation to resume on March 29.

The ship’s black box recorder would reveal details of how the giant vessel blocked diagonally the canal.

Ever Given would be allowed to continue its journey after agreeing compensation terms, Rabei said.

“The ship carries goods worth $3.5 billion. There was cooperation from the company that owns the ship during the crisis,” he said.

According to Zawya website, 1,134 ships passed through the Suez on Monday and another 81 on Tuesday.