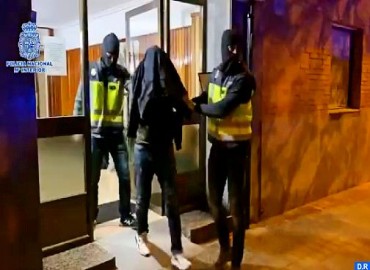 Agents of the Spanish National Police in the town of Basauri, in Vizcaya, have arrested this week a Polisario activist for his alleged involvement in a crime of terrorist threats.

The individual is accused of using his profiles on social networks to encourage attacks and violent actions against Moroccan institutions and people both in Spain and abroad.

“The individual, very radicalized, used profiles on social networks to incite terrorist acts against Moroccan people and institutions in Spain and abroad”, said the Spanish police in a statement.

“The suspect was engaged in intense activity on social media, running several accounts and having a large number of Spanish and foreign followers, exceeding 20,000 people, who receive his messages inciting to commit attacks against the Moroccan community and institutions,” added the statement.

He continuously published his own videos advocating terrorist acts mainly against all unionist and pro-Moroccan Sahrawis, vowing he was ready to commit such violent acts himself.

“The seriousness of his posts, as well as his ability to influence his community of followers, led to his immediate arrest,” said the Spanish police.

The search carried out at the home of the suspect during his arrest led to the seizure of a large amount of equipment, electronic media, telephone terminals and documentation which is being analyzed by the competent services.

The judge in charge of the case ordered the individual’s imprisonment because of the heavy charges brought against him.

The Polisario activist’s detention coincides precisely with the arrest of two jihadists accused of recruiting prisoners for Daesh in Algeciras prison. The two had already declared their “loyalty” to the terrorist organization.

“Their idea was to attack tourist interests in Morocco and to this end they had already begun to search for information on areas of maximum public affluence, as well as how to obtain assault rifles. There were no definite plans, nor were there specific targets, but the Guardia Civil already had information that in prison they had spoken of perpetrating attacks against tourists”, various sources told Spanish ABC.