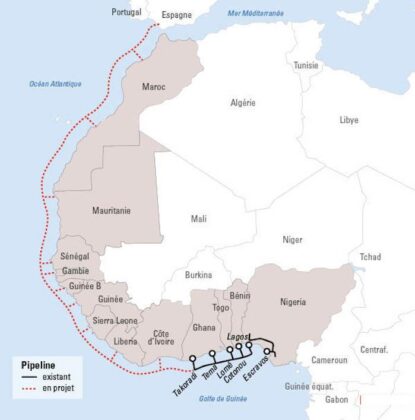 The Nigeria-Morocco gas pipeline project is the best alternative to the Nord-Stream 2 natural gas Russian pipeline project which is at the heart of tensions between the United States, the European Union, and Russia, American news outlet Newslooks states.

The news outlet surveys the many geostrategic differences between Washington, Moscow and Berlin over the Nord Stream 2 pipeline project, explaining that Washington wants at all costs to prevent European countries from becoming dependent on low-cost Russian energy, clearly opposes the project, and has waved sanctions against the Nord Stream 2 pipeline.

The United States and eastern European Union countries contend that Nord Stream 2 is part of Russian economic and political measures to manipulate European countries and could undermine transatlantic ties, the news outlet notes.

The author of the article analyzes the three other alternatives to Nord Stream 2, namely the proposed Qatari gas pipeline to Europe; the US as an alternative to Russian gas; and the Nigerian gas pipeline to Europe, indicating that when considering each of these alternatives it is necessary “to take into account the geographical factor, the cost, guarantees of continuity of flow, in addition to the factor of political stability in countries of origin and transit countries.”

After he analyzed the pros and cons of each option, the author of the article affirms that the African alternative, in particular Nigerian gas, “remains the most realistic from a purely strategic point of view.”

Underlining that Algeria is competing with Morocco to win the Nigerian gas pipeline project to Europe, the article points out that while Morocco proposes the Safe Road project, the gas project across the Algerian road faces many security challenges, the most important of which is its passage through the Sahel region, which to this day is considered a safe haven for terrorist organizations and cross-border crime gangs.

Moreover, the Algerian-Nigerian gas project is betting on the control of four countries on the continuity of the flow, and the most important thing is that Russian-Algerian relations may enable Moscow to control the project behind the scene, the journalist points out.

As to the Moroccan project, he explains that the economic feasibility of this project lies in creating an economic partnership between all the transit countries, including African and European ones. And enabling not only Nigerian gas to reach Europe, but also Mauritania and Senegal.

“Thus, some believe that the Moroccan-Nigerian gas pipeline project guarantees the economic and developmental benefits of 12 countries in Africa and largely serves the development goals in the western African continent, which is in the interest of the Europeans mainly with regard to the issue of illegal immigration,” the journalist argues.

Wondering whether the Nigerian Moroccan gas pipeline project would serve the interest of Europe and the United States, the author of the article says “the answer is definitely yes. But on the condition that the United States engage not only in the financial support, but also by ensuring that the Russians do not use their allies in Africa, especially Algeria, to campaign against this project, which will benefit economically and politically the United States and about 300 million African citizens.

In another article, the outlet discusses this issue with Norman Roule, a former senior Central Intelligence Agency official who also upholds the African alternative.

Norman Roule, who managed numerous political, economic, and energy programs in the Middle East, backed up this argument by stating that “an African source would be important, and Morocco is precisely the sort of stable economic and political partner who could lead an effort from this region.”

As to the Algerian route, he pointed out that Algeria certainly remains a potentially important energy source for Western Europe, however, “security instability in the sub-Saharan region is both troubling and unlikely to improve in the near term.”

ISIS-associated groups are likely to view energy facilities and pipelines as attractive targets and perhaps sources of revenue by holding these same facilities hostages, he explained.

The former senior CIA official deemed, however, that “Algeria’s position would improve if it improved security and economic relations with Morocco and worked with the United States and Europe to enhance security conditions in the region’s energy sector.”

The Economic Community of West African States (ECOWAS) had endorsed the Moroccan-Nigerian off-shore on-shore gas pipeline that will benefit 13 African countries and that aims at fostering regional integration and strengthening energy security of West African states, instead of the Algerian proposal of a tans-Saharan pipeline.