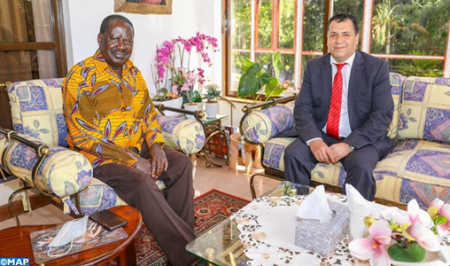 Morocco, a development reference for Kenya, all of Africa – Former Kenyan PM 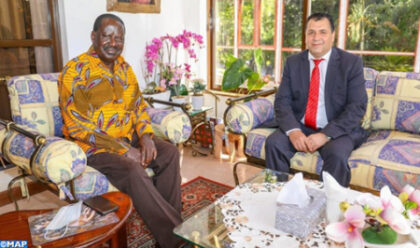 Raila Odinga, High Representative of the African Union for Infrastructure Development and Chairman of the Kenyan Orange Democratic Movement (ODM), said he has been “impressed” by the development reached in several industrial sectors in Morocco, which constitutes, he said, “a reference of development for Kenya and all of Africa.”

“I have a perfect knowledge of Morocco and its fascinating and diverse civilization. I was in the Sahara, the guest of Crans Montana. I had the opportunity to visit the extraordinary port of Tanger Med, and I also recently visited the Mohammed VI University of Benguerir and met officials of the OCP Group,” underlined this former Prime Minister in a meeting, Tuesday in Nairobi, with the Moroccan ambassador to Kenya El Mokhtar Ghambou.

“Morocco is an important country that can be a development reference for Kenya and for all of Africa”, he insisted.

Odinga said he was also “impressed” by the Moroccan industrial sector, in particular that of the automobile which will contribute to accelerating the intra-African trade and ensuring the autonomy of Africa.

“I am impressed by the development experienced by several industrial sectors in Morocco, in particular the automotive sector which will help Africa to be independent”, said the AU High Representative.

“Morocco has all the means to help Kenya achieve its national development agenda,” said Odinga, who also called on Moroccan officials, in the public and private sectors, who are engaged in the blue economy, to help Kenya “establish a tourism and economic infrastructure in the Kisumu region, near the Great Lakes”.

He noted further that the OCP has a key role to play in Kenya and in the region of East Africa which depends mainly on farming.

For Odinga, Morocco and Kenya will have a lot to gain if they pool their efforts. “Kenya will serve as a hub for Morocco in East Africa, and Morocco will play the same role for Kenya in the Mediterranean and in North Africa,” he said.

On the issue of the Moroccan Sahara, Odinga assured that the recognition by the United States of the Moroccanness of the Sahara “will change a lot of things in Morocco’s favor, given that the Sahara could become an economic hub which will attract American and Gulf investments, a hub that will link sub-Saharan Africa and Europe.